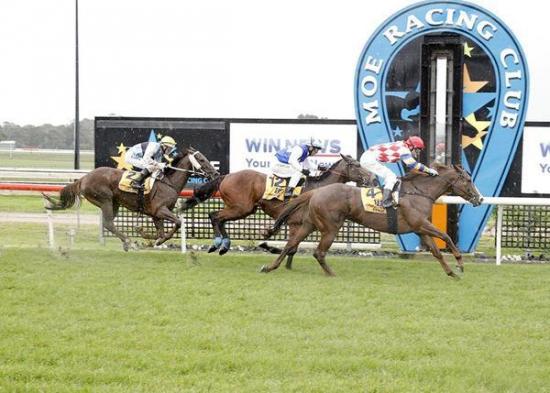 The father-son combination of Tony and Jake Noonan combined to score at Moe when Raven’s Fire took out the LV Express Handicap over 1100m.

The lightly raced 5-year-old mare was having just her sixth career start and Tony signalled further improvement to come.

“She’s been a late maturer but her owners have been very understanding and it’s great to see their patience rewarded today,” Tony said.

“This mare was a handful in her younger years but Jake knows her incredibly well inside out which is why he never panicked when she was off the bridle.”

Jumping well from barrier 5, Jake took up a forward position settling one off the rail before presenting her at the top of the straight where Raven’s Fire ($8) safely held Sheree ($6) to score by half-a-length and Zuperb ($7) a further length behind.

By All Chatter, Raven’s Fire is raced by the same connections that own, and bred from, Ravensgold.

The victory was the second win in three days for the Tony and Jake Noonan combination.