Raven’s Fire too brilliant for them at Bendigo 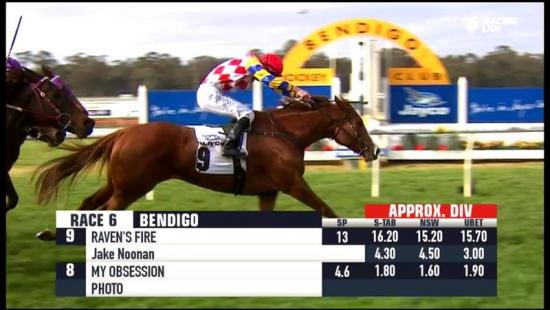 Raven’s Fire is quickly working her way through the ranks for Mornington-based trainer Tony Noonan with the progressive mare leading all the way at Bendigo this afternoon in the Braidie’s Tavern F&M Showcase BM70 Handicap over 1400m.

The victory was mare’s third of her short career which has spanned just eight starts to date and the win came as no surprise to stable representative Jack Turnbull.

“She’s showed us a lot at home and is just as honest as they come,” he said.

“Jake (Noonan) rode her last start and said 1400m would suit and he was spot on.”

Jumping well from barrier 2 for rider Jake Noonan, Raven’s Fire held her position with ease to find the front and dictate the tempo of the race.

With others in the race unable to cross her, Noonan cornered her in front where Raven’s Fire ($13) produced a strong kick to hold her lead to the line and score by 0.75L from My Obsession ($4.60) and Barely A Scent ($7) in third.

“I know this mare pretty well and she’s been a work in progress for a long time,” Noonan said after the win.

“She now knows exactly what she is doing and gives 110 per cent.

“Her attitude today was outstanding. She was a lot more calm around the gates, more relaxed and very gutsy.

“Full credit to the team. The attention to detail down at