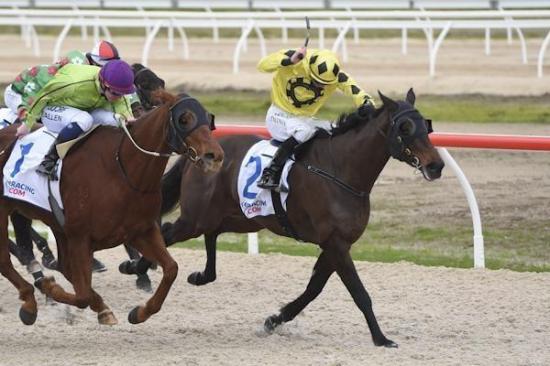 Bolord faught back late to claim victory at Pakenham this afternoon for Mornington-based trainer Tony Noonan in the Racing.com Hcp (58) over 1380m.

Punters had hearts in their mouths as Bolord looked the winner - before looking beaten - and then fighting back on the line for victory.

But the see-sawing performance over the final 200m of the race was no surprise to Bolord’s trainer.

“He’s just a sort of horse that once he gets into that situation, he keeps finding,” Noonan said.

With a quirky nature about him, the 3-year-old God's Own gelding was greatly aided by stable rider Jake Noonan’s association with the horse and understanding of his behavior.

“He thinks about it a bit but he’s got a ton of ability.”

Jumping well from his inside barrier, Jake settled Bolord on the fence one behind the leader but coming around the turn, got pocketed.

Angling out off the fence upon straightening, he lost considerable ground and looked hard pressed for a run before the split came and Bolord ($2.25F) drove through 50m from the post to score by a neck from Bachelor Knight ($5) and Purculiar ($15).

The win was the second of Bolord's career after he broke his maiden 10 months ago where he beat subsequent Group 1 winner Set Square.