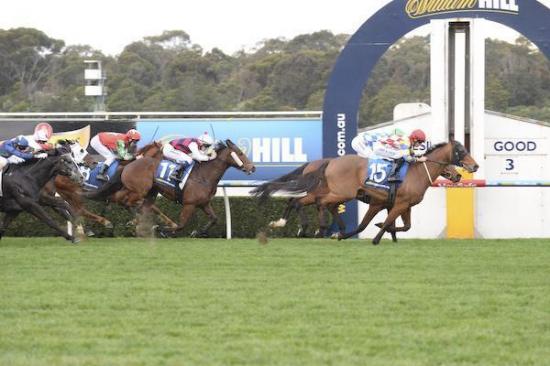 Calibrate made it two consecutive wins when he produced a monstrous turn-of-foot at Sandown this afternoon for Mornington-based trainer Tony Noonan in the Le Pines Funeral BM78 over 2100m.

Still last in the field upon straightening, Noonan was pleasantly surprised by the win.

“I didn’t really go in with any great confidence,” he said.

“Going down the side, he had his head on the side and I thought he was never going to get going.

“You didn’t want to be on him in the corner.”

The 6-year-old gelding by Reset has lived most of his career in the shadows of siblings Criterion and Varenna Miss but Noonan had always hoped he would show his true ability and stand up in this class.

“He’s just so dumb, a dopey bugger. We’ve been schooling him and hoping he would mature at some point.

“There have been a lot of people who have been super patient and I am glad they have been.”

Missing the start under apprentice Michael Dee, Calibrate settled at the tail of the field with a genuine tempo up front towing the field along.

Upon straightening, Calibrate wanted to hang out where he was spotting the leaders 10 lengths 300m from home.

But under skillful riding,

Upon returning to scale, a calm and collected Dee was delighted to get another metropolitan win for Noonan who has been a strong supporter of the apprentice since his relocation from

“That was the instruction – to just get him to relax and in a good rhythm,”

“It took me awhile just to get him to the outside but once he balanced up, he really hit the line strong.”