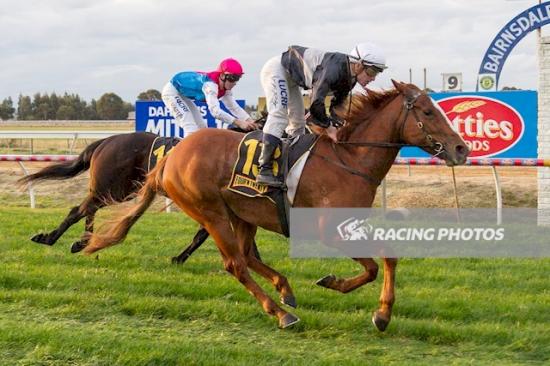 With Axis Point's racing career in the balance, Mornington-based trainer Tony Noonan was delighted to see the mare fight for her career with a strong win at Bairnsdale in the mypunter.com Handicap over 1600m.

With sub-par performances to kick of her prep, she looked to be turning the corner at her previous start before confirming so with a strong win today.

“She’s been a bit big in her previous runs but she's tightened up really well in her past few runs,” said assistant trainer Douglas Arnold.

“The owners have been very accommodating of her knowing she has had issues in the past so it’s great to be able to get a result for them.

“Her career actually looked over a month ago when she got cast in her box but x-rays cleared her of any major damage and the owners were keen to push forward knowing the ability she has when she wants to bring it.”

Jumping from barrier 10 in the field of 11 under Jarrod Fry, the 6-year-old Spinning World mare relaxed beautifully midfield in the Heavy 9 going.

As the field compacted in bend prior to straightening, Fry bought Axis Point ($8) to the outside of the track where she let down strongly to hit the front 100m out and hold Battles End ($12) by 0.75L with Marthick ($6.50) a further three lengths back to bring up a winning treble for Fry.

The win continued a stellar start to the new 2016/17 racing season for Tony Noonan who chalked up his third winner for the week into the new season.