Top ride lands Eljetem back in the winners’ circle at Sandown 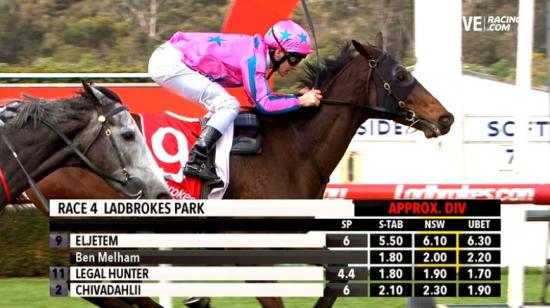 A gem of a ride by Ben Melham saw Eljetem win well at Sandown for Mornington-based trainer Tony Noonan despite the horse’s wayward manners throughout the run.

Racing with his head in the air and mouth open at sporadic points throughout the race, Melham had to earn his riding fee but once balanced, the 6-year-old Jet Spur gelding was too tough for his rivals.

“He’s a bit of an awkward going horse but he still does try,” said assistant trainer Douglas Arnold.

“He’s a really big horse, a bit of an awkward goer and he just hasn’t gathered himself up yet but we’ll keep working on that and just want to thank Michael and Sue McMahon for supporting us with this horse.”

Settling forward in the run, Melham on multiple occasions had to steady his mount down the back of the course where he never appeared to settle.

Upon balancing up, Eljetem looked to have his mind on other matters when he attempted to lay in towards the rail before Melham pulled the persuader on his mount which straightened him back up.

Hitting the front with 200m to go but still wanting to lay in, Melham earnt every cent of his riding fee to keep Eljetem ($6) on a straight course to the winning post to score by .75L from Legal Hunter ($4.40F) and Chivadahlii ($6) a further neck back in third.

“He’s an awkward bugger to ride out but he’s got nice ability,” Melham said after the win.

“He’s got a terrible habbit of wanting to run it pretty sharply.

“He’s sort of a bit timid amongst horses which is why I wanted to get out and get going before the favorite got around me.

“But once he knuckles down to the job, he’s got a good turn of foot.”

The win was Ejetem’s second at Sandown since being sent down to the Mornington stables of Tony Noonan.