The Summer of Noonan continues with Group 3 win at Caulfield 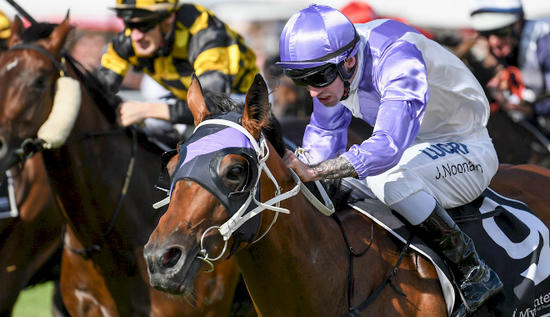 Jake Noonan continued his stellar Summer on Saturday when victorious on Saturday in the Group 3 Bellmaine Stakes aboard Prussian Vixen.

It was Noonan’s first win at stakes level since his breakthrough win in the 2016 Group 1 Sangster Stakes before a sickening race fall halted the promising hoop’s momentum.

Making the win even sweeter for Noonan was the fact he had followed Prussian Vixen ($12) throughout her career for trainer Michael Mehegan for whom he was able to deliver a maiden win at stakes level.

“It was testing but worth it getting on a good classy mare like her,” Noonan, celebrating his 24thbirthday, said.

“She’s in terrific form and every time you raise the bar on her she always steps up.

“It was a classy race today. For her to do all the work and hold them off late…good on her.”

The win continues Noonan’s ascension to the top of Victoria’s riding ranks following his return from a broken leg where the hard-working hoop continues to be well supported with rides from leading trainers Mick Price, Henry Dwyer, Clinton McDonald, Grahame Begg and his father Tony.