Turf Beauty puts on a show at Stony Creek on debut 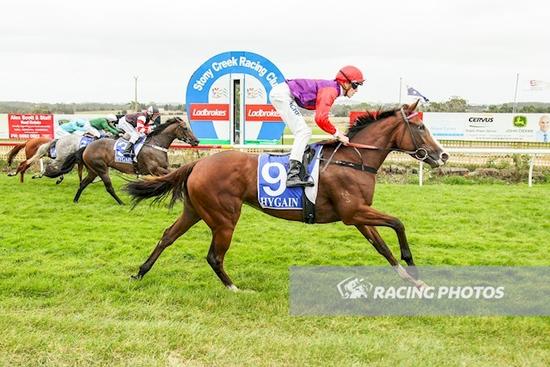 With celebrity style looks, the flashy Turf Beauty impressed on debut over 1100m at Stony Creek for Mornington-based trainer Tony Noonan aided by a savvy ride under apprentice Ben Allen.

Despite being on debut and taking on older mares, Turf Beauty came from back in the field to flash down the stand-side rail to ultimately win comfortably.

“I got a little bit of a heads up earlier in the day that might be the place to be,” said Noonan.

“I trained her mother and Lucky Racing were good enough to give it to us to train.

“She’s a nice filly that will just keep improving.

“She wants to be a racehorse and that’s a big help.

Jumping evenly from the gates, apprentice Ben Allen eased back in the field behind a hot tempo.

Settled through the bend, Allen started getting to work on the 3-year-old daughter of Daliapour who looked to be struggling on the Heavy 8 conditions before Allen made the decision to ride towards the outside rail.

Tracking into the race on the better ground towards the outside, Allen had been spotting the leader 8 lengths at the top of the straight before Turf Beauty ($8.50) let down with a strong turn-of-foot to swamp the field by the 50m mark and pull clear to score by 1.5L from Superior Rose ($4.20) and Itstings ($5).

“Just coming to the corner, I was a fair way off them,” said Allen after the win.

“Even when we were coming around the bend, we were just wheel spinning and we weren’t making up any ground so I thought, once I go around I’m going to be wide anyway so I thought I’d continue to the outside and it seemed to pay off.

“Normally when you ride first starters, there’s real heightened revving. They do a lot wrong but she was different in that she was quite relaxed and did a lot right and it pays off a lot.

“When you’re coming down the outside on your own, it’s a big effort to ask for a first starter and she seemed to do it pretty easy.

“Mr Noonan does a good job with all of his.”

Noonan will be hopeful that the debut victory for Turf Beauty will be a signs of things to come if she can prove a better than her mother Hanna Rossa who Noonan trained to run 2nd on debut before earning more than $300,000 in prize money.