Perfection produced at Pakenham as Pirellina powers to victory 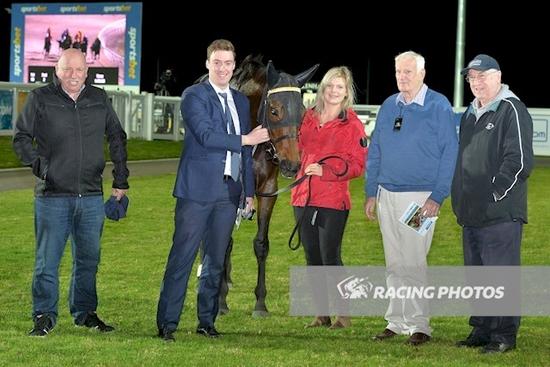 Coming right over the top of her opposition, Pirellina proved too strong at Pakenham this evening over 1600m to break her maiden status emphatically for Mornington-based trainer Tony Noonan.

As a filly who had been a work in progress, it was a welcome sight for Noonan who was excited by his filly’s prospects now that she was getting into the distance ranges he expected her to be performing over.

“But things sometimes don't just work and they haven’t for her but she raced well her last run here and we just learnt a couple more things about her so we’re on the way now.

“I was a little bit worried on the corner because they didn’t go terribly hard and she was back in an awkward spot but that’s the beauty about this track here – it’s just a superb track.

“Horses can do what she did tonight. They can get to the outside and get a bit of room and hit the line.”

Jumping evenly from the gates under jockey Michael Dee, the 3-year-old filly by Gio Ponti settled in a midfield position behind a moderate tempo.

Creeping into the race by the 600m mark, Pirellina rounded the field coming on as the widest runner before letting down at the top of the straight.

In clear running room and hitting the front by the 200m mark, Pirellina ($5.50) proved too strong as she ran away from the field to score by 2 lengths from Arthurian ($61) with Penthouse Poet ($5.50) a further length behind.

Making the win even sweeter for Noonan was the group of owners who braved the cold Melbourne evening to trek out to Pakenham and witness their filly’s maiden win.

“I thought it was a great ride,” said part-owner Graeme Ward.

“I thought he might have got too far back but he judged it perfectly and well done Tony for putting Michael on. “

Further satisfying the trainer was the attendance of new Syndicate Manager Sam Lefebvre who has taken over the KSC Syndicate whose Noonan-stable successes date back to the early 1990’s with Bionic Bess.

“It’s been awhile coming with her but Tony’s been patient and it’s nice to get the result,” said Lefebvre.

“I’ve owned a few horses with Frank and my grandfather, so g’day Pa if you’re watching on TV at home. “

With Pirellina being out of the Group 1-winning mare Cinque Cento whose victory at the elite level came in the Doomben Cup (2000m), getting out to these distances was always going to be a key in Pirellina’s success. But it wasn’t an easy task for rider Michael Dee.

“Early on, I drew 3 and I was still 3 wide so I had to make a decision to go forward or come back and I personally think this horse is better ridden that little bit colder so I elected to come back and it worked out ok there for a little bit.

“They went slow early but a little bit of tempo went on with that three-wide line sort of improving mid race which worked out for us.

“I just wanted to keep the horse comfortable, and relaxing was the key.

“Tony said, ‘just don’t be digging it up out of the barriers and the key was just to get relaxed’.

And relaxed she was to score well for the Noonan stable whilst also rewarding connections with a handy Super VOBIS bonus.