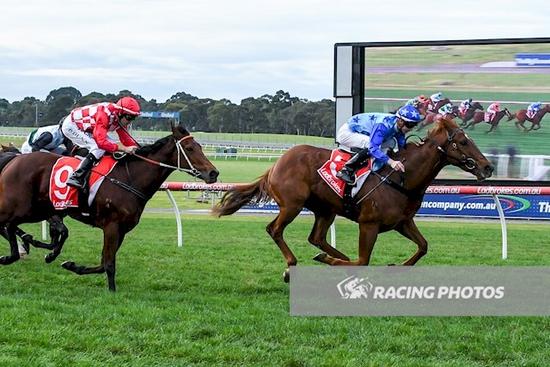 As the sole debutante in the Chandler Macleod Plate, Elite Legacy kept his perfect record intact for Mornington-based trainer Tony Noonan at Sandown over 1000m.

Debuting in open company for 2-year-olds, Noonan always had an opinion of his speedy youngster.

“He’s always shown nice ability and there has always been a lot of confidence about him as far as his ability,” said Noonan.

“Just as to whether he had the smarts to do it today is what you would query.

“Usually I’d take a softer option, a more conservative approach rather than bringing them to town but he’s a nice horse and he’s improving.

With regular stable rider Jake Noonan overseas on holiday, Jye McNeil had been doing some work for the Noonan stable and was rewarded with the ride today.

Jumping from a wide alley, McNeil steadied the Lope De Vega gelding to settle forward of midfield behind a strong tempo.

Angling away from the rail upon straightening, McNeil allowed his mount to amble up to the leader where Elite Legacy ($5.50) hit the front by the 200m mark where he found the line well to hold off Bella Martina ($8) by a length and Tata Madiba ($11) a further length away.

“I’ve done a little bit of work on him and I really like the way he goes about it,” said McNeil after the win.

“Today was a little bit of a shock but he took it all in his stride and he did it nicely.

“I was expecting him to be a little but slow out. He’s a big strong horse that is probably going to get over a bit more distance so I was little bit surprised with how well he travelled up and put himself in the race but he was pretty impressive.”

Elite Legacy was a $70,000 yearling purchase from the 2016 Magic Millions Adelaide Yearling sale where he was sold by Cornerstone Stud who remained in the ownership.