After six minor placings, Steel of Madrid breaks through for maiden win 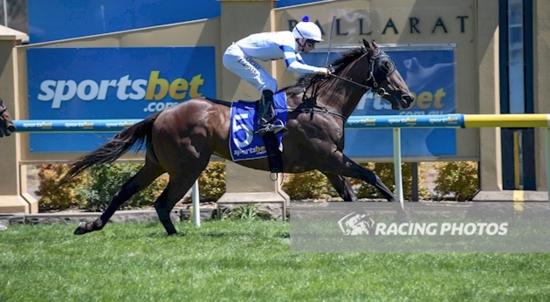 As one of the country’s better maideners, Steel of Madrid finally broke through at Ballarat this afternoon for Mornington-based trainer Tony Noonan but not without giving connections a fright near the line.

Hitting the front at the 200m mark, Steel of Madrid attempted to lay in sharply towards the running rail before rider Jake Noonan steadied him to break his maiden at start number nine which had previously delivered six minor placings.

“He did his best to throw it away which he seems to be making a good habit of,” he said after the win.

“A lot of credit goes to the owners because they’ve had to be pretty patient with this horse.

“It’s taken him a little while to break through because he showed us the world of ability but just delivered us an atlas.

“What we’ve seen with Lope De Vegas is they get better with age. You look at Vega Magic and Santa Ana Lane, they seem to get better as they really mature in age.

“This horse is the same. He did a lot wrong that last 50m and just wanted to throw it away.

"There’s plenty of ability there. It’s just trying to get him to focus on the job and when he does, he’ll measure up.“

The 4-year-old gelding by Lope De Vega had been nominated for the $150,000 Magic Millions Maiden over the weekend but with the horse unable to obtain a start, trainer Tony Noonan was delighted to get the win for connections today.

“I’d been disappointed with the horse. He’s shown a fair bit but just hadn’t delivered.

“I’m rapt for the owners. They’ve persevered. He’d shown a lot of promise early but just hadn’t delivered but now that he’s won he might turn the corner.”