Witness too good at Mornington for Dominant win 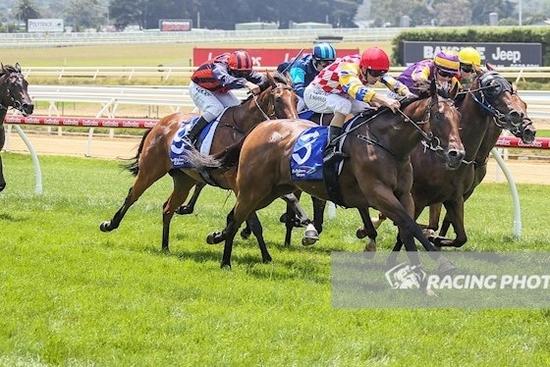 Dominant Witness proved too good for rivals at Mornington this afternoon when swamping over the field for a powerful win in the Big Screen Company Maiden over 1000m for Mornington-based trainer Tony Noonan.

“That was very impressive,” said stable representative Alfred Chan after the win.

“He was a tad slow out of the gates which this horse had a tendency to do in the past but he got a peach of a ride by Jake (Noonan) who never panicked and was able to work him to the outside where we knew he’d let down if he had clear running.

“From the sticky alley, the plan had always been to ride him quietly knowing what he was capable of so it’s just fantastic when everything goes to plan.

“Full credit has to go to (syndicate managers) Tim Wilkinson and Phil Brown. They bought this horse themselves in Adelaide and have been with our stable for a very long time.

“Their syndicate are an absolute pleasure to train for so it’s just great to see so many of them here today to enjoy the win.”

Jumping from barrier 7 in the field of 9, he was half-a-length slow out of the gates before Noonan got the 3-year-old son of Star Witness into a good rhythm coming down the side of the course.

Approaching the home turn, Dominant Witness looked to have dropped the bridle before Noonan gave the horse a squeeze as he was spotting the leaders 6 lengths upon straightening.

Working towards the centre of the track, Noonan was able to come off heels as Dominant Witness ($4.60) pinned his ear backs to swamp over the top of the field and score by half-a-length from Rocky’s Echo ($21) and Rubyanna Jane ($7).

“I was on the best horse in the race,” Noonan said upon return to scale.

“I was a long way off them so I thought he would be running on and hitting the line all too late but he did no work in the run behind a strong tempo so it was his class that just shone through.

“He’s a horse that’s still just learning his craft. He just wanted to over race a little bit early so there’s still a bit to learn but he’s got good natural raw ability.”

Dominant Witness was having his fourth career start and is raced by Tim Wilkinson’s Dom Racing Syndicate who have had horses with Tony Noonan spanning 15 years through the likes of Domzero and more recently Paradanza.