Manolo Blahniq gaps them at Caulfield for explosive win 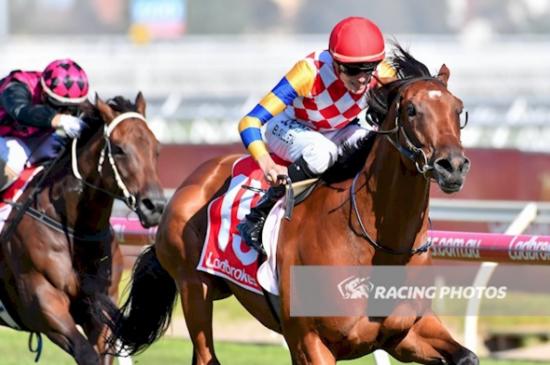 Manolo Blahniq’s class shone through at Caulfield this afternoon with victory in the John Moule Handicap (1400m) after knocking on the door at his previous starts for Mornington-based trainer Tony Noonan.

Having last saluted at his second career start, it was a relief for Noonan to finally have his mount back in the winner's stall, albeit 15 starts later.

“This horse won a Group 3 at his second start and had a bit of a boom on him but he was just a horse that wanted to over-race and do things wrong so we’ve taken a lot of time,” said Noonan.

“The staff have done a good job, and Jake (Noonan). They’ve worked very hard on this horse at home to get him to relax and settle, and we saw the result of it today.

“He’s still only lightly raced and he’s got good ability so I think he’ll keep improving."

Marginally slow out of the gates, the 4-year-old son of Jimmy Choux settled towards the back half of the field under jockey Ben Allen.

Relaxed behind the strong tempo as the field came down the side of the course, Allen gradually worked off the rail as they entered the home turn.

Balancing up at the top of the straight, Manolo Blahniq ($4.40) found clear running towards the centre of the track where he effortlessly reeled in the leaders passing the 150m mark before clearing away to score by 2.75L from Glenrowan Prince ($26) and Chippenham ($10)

“Mr Noonan has got him looking a treat. He’s paraded better and better each start,” said Allen after the win.

“The first start when I rode him this time in the prep, he was revving and jig- jogging in the yard. But the way he paraded today and bowled to the gate – that’s how he ran the race beautifully.

“He gave me an easy ride and he was just too good for them."

The strong win was Manolo Blahniq’s first since being gelded at the end of his previous prep having contested 10 of his first 12 starts at Group or Listed level.