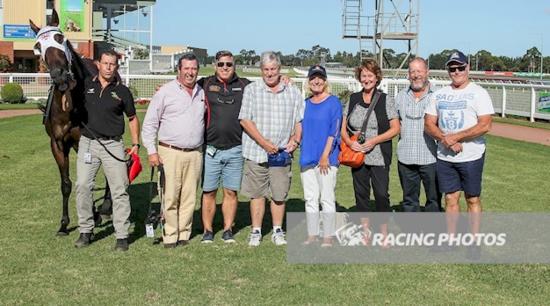 Going from a perennial bridesmaid to win three in succession, Steel of Madrid again proved dominant at Sale this afternoon for Mornington-based trainer Tony Noonan who has his steed in cracking form.

With victory today in the Grand Handicap Sprint Heat, Steel of Madrid has earned ballot exemption from the $150,000 series Final on March 17 at Flemington, a race Noonan had identified as the horse's target.

“When acceptances came out and he was fourth emergency, I thought ‘my God – he will struggle to get a run,’” said Noonan.

“But sometimes you just get a bit of luck at the right time and the horse has kept stepping up.

“I was a little bit worried when we drew [barrier]1 seeing as they were getting towards the outside but Jake gave him a good ride.

“He knows the horse backwards and it was never in doubt.”

Jumping well from the gates under Noonan’s son Jake, Steel of Madrid was able to drive up and hold the rail which prompted others to stay wide in the run.

Leading the field into the straight, Noonan comfortably angled the 4-year-old son of Lope De Vega towards the outside rail with the field following.

As Steel of Madrid returned to scale, shouts of “Newmarket!” were bellowed by managing owner Jammie Dillon who has been a long-time supporter of the Noonan stable with his company DCF also sponsoring Jake.

“I was just in a position from barrier 1 to work to the outside and be where I needed to be,” said Jake after the win.

“My horse travelled that well into the straight. Geez I was confident a long way out.

“He really put him them away and had a good look around but it’s great for the owners.

“They thought a Newmarket might be right up his alley!”

Steel of Madrid will now head towards the Grand Handicap Sprint Final at Flemington on March 17 with Dillon to then set his sights on the 2019 Newmarket after.