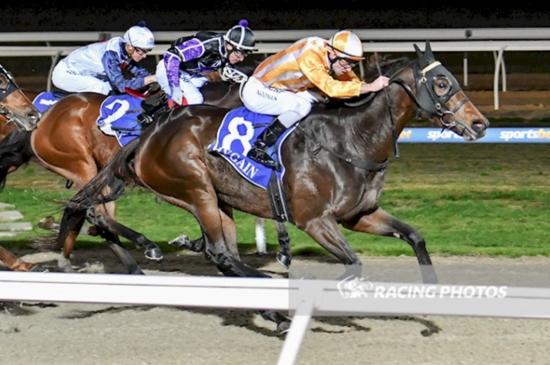 Winning again at Pakenham on the Synthetic surface, Pirellina will be relishing the upcoming Winter after she made it two wins from three starts on the surface for Mornington-based trainer Tony Noonan.

“Jake put her in a nice position, got her settled and worked her nice to the line,” said stable representative Robert Gardiner.

Jumping well from barrier 7 in the field of 9, rider Jake Noonan settled backwards of midfield with cover behind the genuine tempo.

With his mount settled down the back straight in a good rhythm, Pirellina looked to be travelling sweetly as the field bunched nearing the home turn. As the field fanned wide, Noonan just gradually worked between runners before finding clear running at top of the straight.

Once balanced up and spotting the leader five lengths, Pirellina ($8) let down with a booming turn-of-foot to hit the front by the 150m and holding the field at bay to win by a length from Brueghelino ($3.10F) and Ice Girl ($5.50) in third.

“Coming into today’s race, I couldn’t get overly confident on its form,” said Noonan after the win.

“She’s just been a little bit disappointing but I did say to Graeme and the other owners that her best form has been on this ground.

“She seems to grow a leg when she gets on this surface.

“Hopefully they bring some black type races and city class races to this track because she might measure up.”

The 4-year-old Gio Ponti mare’s two career wins have now both come on the surface over 1600m.