Mutual Respect kicks off career with win on debut 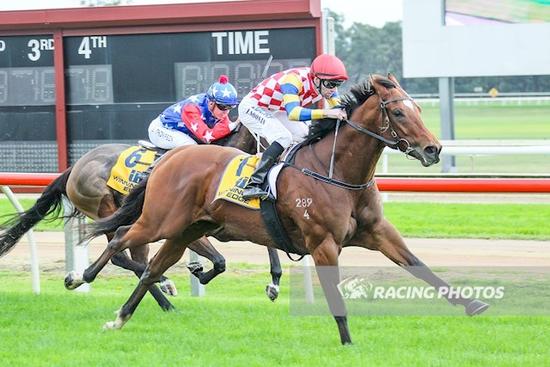 Getting a perfect start to his career, Mutual Respect proved a class above his opposition on debut at Moe over 1000m this afternoon for Mornington-based trainer Tony Noonan.

But despite the dominant win where Mutual Respect endured a tough run, Noonan was quietly confident that the 3-year-old Trusting gelding had plenty in the tank and will improve on the run.

“We haven’t tightened the screws on him. It was either trial him at Werribee on Monday and have him probably a little bit more fool-proof, or bring him today.

“And we’re, financially, in a much better position [here] than the trials.”

Jumping from barrier 10 in the field of 12, rider Jake Noonan was trapped wide throughout the run when unable to slot in for any cover.

But despite being exposed in tough conditions on a track rated Heavy 8, Mutual Respect looked to be cruising down the side of the course. Still wide through the bend, Noonan just held his position before loosening his hold and making quick work of the margin to hit the front at the 150m mark.

Nearing the line, Mutual Respect ($1.75F) showed signs of immaturity when he wanted to lay in towards the rail but with a comfortable margin, held on for an easy win by 1.25L.

After soft win came as no surprise to the younger Noonan.

“He ground was obviously going to be somewhat of a question mark but he’s proved too good.

“He wanted to wander out a little bit. I had to try and convince him to get on with it but once he put em’ away, he was pretty good.”