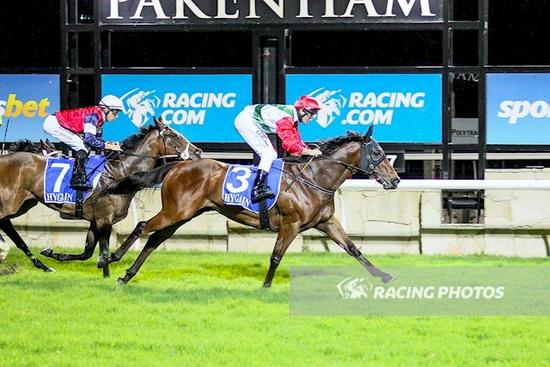 It had been a long time in between drinks but when rainfall finally hit Victoria, Accelerato thrived in the Soft going with a strong win at Pakenham over 1200m for Mornington-based trainer Tony Noonan.

“He needs give in the ground and we’ve been chasing tracks from here to Kembla Grange trying to find this sort of a track,” said Noonan after the win.

“I want to thank the owners for being so patient. It’s been a really frustrating run but just getting the horse on the right sort of surface, and he did the job.

“I’ve spent the last 10 days with Matt Grady at Laurel Oak going through weather maps all over the State so it’s been frustrating.

Jumping evenly from barrier 8 in the field of 12 under jockey Brad Rawiller, the awkward draw saw the 5-year-old Fastnet Rock gelding posted three-wide with no cover through the bend.

Despite the tough run in transit, the horse switched off nicely for Rawiller who commenced tracking into the race prior to straightening, but was pushed deep on the course as others under him attempted to angle out themselves.

Spotting the six lengths to the leaders upon straightening, Rawiller balanced Accelerato ($14) up in the centre of the track from which point, the horse relished the Soft 7 going to surge to the front by the 100m marker and hold on for a strong win with Supre ($5.50) a length behind in second, and Saturation ($5.50) third.

“This horse - I think the biggest key with him is he can over-race,” said Rawiller.

“I had to shut him down a few strides out of the gates but we were caught without cover and normally it would probably be the end for a horse like this one. But for some reason I was able to keep travelling and in a great rhythm.

“Even though we were three or four wide with no cover, it shouldn’t really matter because he was just beautifully relaxed for me and he showed it in the build up and run to the line.”

The win was the second of Accelerato’s career with Rawiller in the saddle on both occasions.