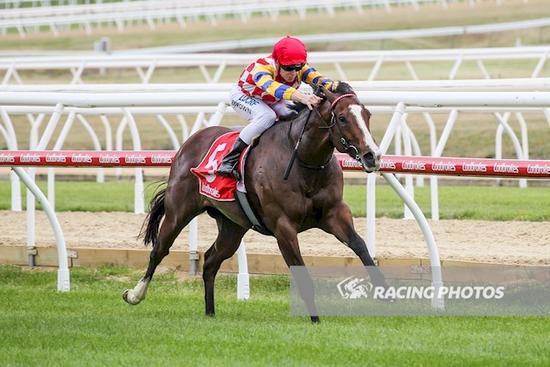 It was a familiar sight for owner and trainer when Raven’s Blaze followed in her big sister’s footsteps to break through for a maiden win at Mornington over 1000m for local trainer Tony Noonan.

The younger half-sister to Raven’s Fire, who was also trained by Noonan, continued the family tradition of saluting at the track where several family member have passed through Noonan's stables, just up the road from the racecourse.

“The people in her have been terribly patient,” said Noonan after the win.

“She’s a four year old mare that's only had a couple of runs but they’re good people and they’ll be very excited.”

“The lad that rides it, rides very well - Ethan Brown.

“I said just work with her. She gets a bit anxious so he did the right thing.

“She’s got good natural ability and she’ll be even better with a bit more give in the ground so it was a good result for this time of the year.”

Jumping well from barrier 6 under jockey Ethan Brown, the 4-year-old Captain Gerrard mare settled on the speed, sitting outside the leader.

Eyeballing the leader the whole way, Brown stalked up by the 400m mark where Raven’s Blaze ($5.50) cruised to the lead through the bend before giving a strong kick at the top of the straight.

On her home track, Raven’s Blaze quickly sped clear to open up a margin as backmarkers in the field could only watch on as Brown eased down his mount for a comfortable 3.25L win.

“She’s probably got the fitness edge on her this time rather than last start,” said Brown.

“The whole objective of today was to just get her to relax a little bit and she did that.

“She sat outside the leader comfortably and by the 400, she just towed me up.”

The win continued the remarkable run of success owner-breeder Joanne Spears has had with this family which also included 5-time city winner Ravens Pal.