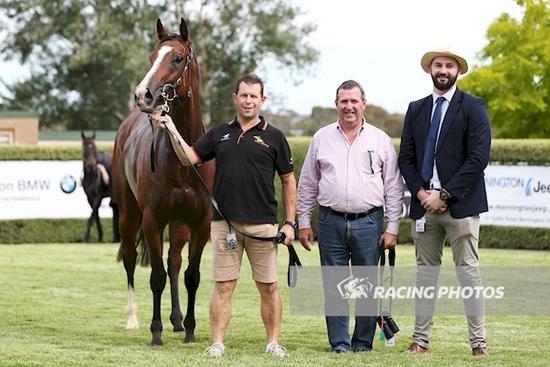 Thriving on her home track, Raven’s Blaze made it two wins from two attempts at Mornington for local trainer Tony Noonan.

Leading all the way, it was a comfortable watch for Noonan whose stables are just up the road from the racecourse.

“She loves home like I do - Marvellous Mornington,” said Noonan after the win.

“She was disappointing the other day (at Moe). I had this idea that she might have liked a bit of give in the ground but she’s now raced on top of the ground twice and raced a lot better.

“The other day she just wasn’t happy [on Heavy going]. Today she was a lot happier and so was the trainer.

“She’s a tough little nut. She’s a good eater and does everything right as far as that’s concerned but it’s just about getting her relaxed in the run. Jake did a good job today.”

Jumping well from barrier 5, with Noonan’s son Jake in the saddle, the 4-year-old daughter of Captain Gerrard cruised to the front where she was able to cross over to the rail unchallenged.

Settled as she led them up the side the course, Raven’s Blaze travelled effortlessly as others in the field came under pressure. Cornering comfortably under hand-and-heels riding, Raven’s Blaze gave a strong kick in the home straight to retain her perfect record at Mornington with a 1.5L victory to back up her 3.25L victory in November at the track.

“Credit to the staff and all at home because she’s a bit of a rev-head and she’s been a bit of a work-in-progress trying to settle,” said Jake after the win.

“We tried to educate her a little bit but in the end, we thought we’d just roll with her and it’s really worked, especially at her home track where it’s a big advantage.

“Dad used to train the mare who was a half-sister (Raven’s Blaze) to her and she was a bit the same. She eventually settled a little bit but I don’t think they’re the kind of horses that will settle and come off the backs. I think they’re just high cruising speed sort of horses.

“There’s nothing better than a Mornington-trained horse running at Mornington and probably back on top of the ground today too.”

The victory was another feather in the cap for owner-breeder Joanne Spears who bred and raced metropolitan winners Raven’s Fire and Raven’s Pal with close friends and the Noonan stable.