Raven’s Blaze motors around Mornington for another win 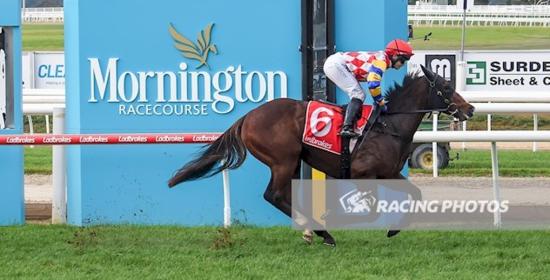 On a blustery day down on the Peninsula, Raven’s Blaze continued a cracking run of form to score first-up for local trainer Tony Noonan, securing her second metropolitan win to surge her earnings over $100,000 at her 11th career start.

But whilst the win was emphatic, it wasn’t without drama before the race with Noonan considering to scratch due to the Heavy 9 track rating which had been downgraded earlier in the morning.

“I really only made the decision half an hour ago to run because I haven’t run her on this ground before. I tossed and turned,” said Noonan after the win.

“I decided we’d roll the dice because she’s got such a good record here [at Mornington] and just loves it.

“We knew that she’d lead and she’s just got exceptional speed.”

Jumping well from barrier 3 in the field of 12 with apprentice Jessica Eaton onboard, Raven’s Blaze went straight to the front where she cruised down the side of the course, opening up a margin of three lengths as the entered the home turn.

Upon straightening, the 4-year-old mare had the rest of the field of the bit as she gave a strong kick to extend her margin. With a comfortable lead passing the 50m marker, Raven’s Blaze ($8) started putting in short ones but with a well-timed ride by Eaton, still held on to score comfortably by 2 lengths from Capanello ($17), and Kaplic ($41) a further length behind in third.

“I was fortunate enough to get a good feel of her in a trial here before today and I learned a lot about her,” said Eaton upon return to scale.

“She’s pretty one-dimensional and has breathing problems so you just have to roll with her.

“She was really good today.”

With the win coming at Mornington’s metropolitan Queen’s Birthday meeting, Raven’s Blaze is putting together a serious record with it being win number 4 - all over 1000m - from 11 starts to take her earnings over the $100,000 mark.

Raven’s Blaze was bred by long-time Noonan stable supporter Joanne Spears who races her with family and friends, many of who also raced city-winners Ravens Pal and Raven's Fire with Noonan.