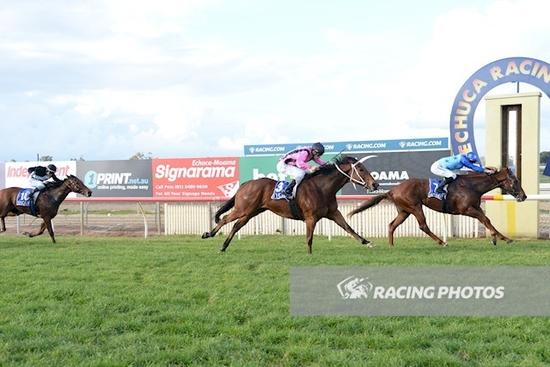 Mornington-based trainer Tony Noonan capped off a cracking week for the stable with his third winner from six starters when Elite Legacy led all the way to win comfortably at Echuca in the Echuca Newsagency Handicap over 1000m.

Although the win came comfortably, it had been two years in between drinks for connections after Elite Legacy won on debut as a 2-year-old, but connections remained patient after the horse ran first-up after a long break, three weeks ago, only to run third.

“He just needed to get that run under the belt to get him fit and he’s done the job here today.

“Jake (Noonan) knows him very well, He knows his gears, he knows his knicks and knacks so it was a great ride by Jake.”

Jumping well from barrier 4 with stable rider Jake Noonan in the saddle, Elite Legacy travelled comfortably in the Soft 6 conditions, settling outside the leader in transit.

Gradually working forward to put his head in front, coming through the bend into the home straight, Jake elected to hold his position away from the rail. Upon straightening, Elite Legacy ($4) kicked well clear of the field to open up a strong lead which was ultimately unassailable as he held a fast-finishing Credible Witness ($3.20F) by a length.

“He was always going to be in need of that run. He strips fitter and gets to a big track with a bit of give in the ground which he appreciates,” said Jake.

Elite Legacy was Noonan's second runner for at the meet after debuting Dynamic Duo in the first race of the day for an eye-catching third.