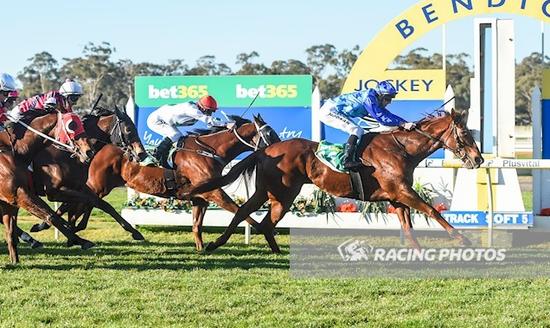 Elite Legacy proved too strong this afternoon in the showcase race at Bendigo over 1000m for Mornington-based trainer Tony Noonan who is delighted to have his mount string back-to-back victories since returning from throat surgery.

Highly touted two years ago when winning on debut at Sandown as a 2-year-old, Elite Legacy ultimately went 18 months without re-visiting the winners circle but Noonan was relieved to finally have his steed’s career back on track.

“He showed a lot of promise early but things just didn’t go right for the horse and in those sort of situations, they just lose a lot of confidence. You just hope they come back.” said Noonan.

“When he won the other day and his work since, he’s just grown in confidence.

Jumping evenly from barrier 4 in the field of 13 under with son Jake in the saddle, Elite Legacy held his ground as runners jumping wide on the track pushed forward to give the 4-year-old son of Lope De Vega an ideal sit in transit.

Peeling out at the top of the straight, the younger Noonan breezed effortlessly into clear running where Elite Legacy ($4.20F) let down with a strong turn of foot to find the front with 100m to go before holding Definia ($11) by a length and Reward With Return ($31) in third.

“I have to give a bit of credit to the jock (Jake Noonan) this time. He doesn’t get a lot of credit from me but he’s riding as good as anyone at the moment,” said Noonan after the win.

“He just showed a lot of tactical nous there. We knew there was going to be a lot of speed. He’s just a big horse and doesn’t like to get crowded so I just told him to be a little bit softer on him early and he gave him the right ride for the race.”

Equally pleased with the win, Jake was rapt to bring Elite Legacy back to the winner’s stall for the group of loyal owners.

“Credit to this horse. He‘s starting to live up the ability we always thought that he had,” said Jake upon return to scale.

“He’s just been a slow maturing Lope De Vega. We’re just starting to figure him out and the race just panned out perfect today.

Trainer and son will combine again tomorrow in Sydney as the Mornington-based duo travel to Randwick with last-start city-winner Raven’s Blaze.