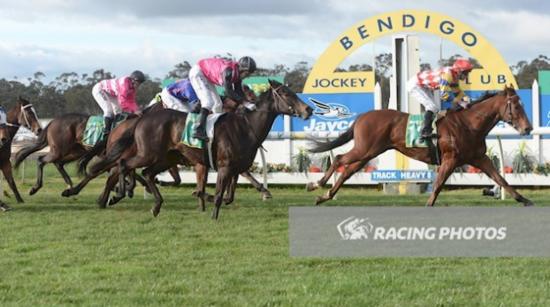 Owned by Mum, trained by Dad, ridden by Son - the Noonan family will be celebrating together after Mutual Respect appreciated the Heavy 8 conditions at Bendigo this afternoon to produce a strong win for Mornigton-based trainer Tony Noonan.

But it wasn’t all blue skies for the Noonan camp with the trainer having originally contemplated scratching the horse, as revealed by son Jake after the win.

“There was what looked to be an easier race on Thursday at Pakenham worth the same amount of money.

“He was going in thinking he (Mutual Respect) wasn’t a winning chance and wasn’t as confident as I was because I told him to run it.”

Although the trainer was not on course today, taking some time away from the stables, Jake was confident the stable always had a strong opinion of the 4-year-old Trusting gelding.

“I just found my feet in the second half. I got a lovely passage through and when I presented at the top of the straight, gave him a slap on the left to give him something to think about, he lengthened out pretty well.”

Whilst Jake was the only member of the family on track, he was delighted to deliver the win for Mutual Respect’s sole owner, Mrs G A Noonan.

“Mum owns it. It’s all in mum’s name so hopefully she slings.”