3 on the trot as Elite Legacy brings up hattrick 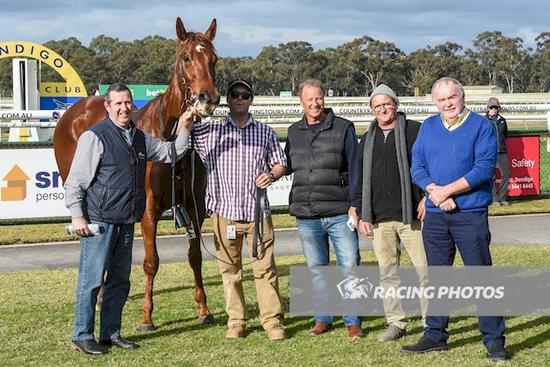 The terrific prep of Elite Legacy rolled on at Bendigo this afternoon in the Farewell Alan Browell BM64 Handicap over 1000m for Mornington-based trainer Tony Noonan who brought up a hattrick of wins for the gelding.

Despite rising up in weight to carry 61kg in the run, it was a relatively easy watch for connections who will be delighted to have taken on Noonan’s advice 12 months ago to have Elite Legacy undergo throat surgery to fix a breathing issue.

“The horse has gone very well. The staff have done a terrific job with him at home,” said Noonan.

It’s been a dramatic turnaround for Elite Legacy which prior to his first win of the prep last month, hadn’t won in the 2 years prior.

“You’ve got to know your horse. We’re in a fortunate situation and at my stage of my career.

“We only have a small team so it allows you to concentrate. A horse like him which had issues, we’ve been able to spend a bit of time and think through it and get it right.”

With a bevy of connections on course to celebrate Elite Legacy’s third in in six weeks, Noonan paid tribute to one of the Bendigo community’s long-time stalwarts.

“Before I go, I want to give credit to Alan Browell. I was terribly excited this morning to see that this race is in his honour.

Jumping well from barrier 10 in the field of 10 under son Jake Noonan, Elite Legacy was given a lovely trail into the race with Captain Crackerjack also pushing forward from a wide alley.

Sitting just off him as the field stayed wide on the track’s Soft 7 conditions, Noonan gradually pulled his mount into the clear where he relished in the conditions. Benefiting from the soft run in transit, the 61kg on his back was no issue for Elite Legacy ($3.20F) who scored by 1.25L from Bel’s Banner ($6) and Captain Crackerjack ($10) staying on for third.

“Credit to Dad, credit to the staff at home, and especially the owners,” said Jake after the win.

“They’ve been ever so patient and persistent with the horse.

“He won his first start in town so they would have walked away petty confident they had a nice horse.

“Not that we ever lost any faith in his ability but we’re starting to reap the rewards now.”

With the win, Elite Legacy took his career earnings past $90,000 with his fourth win from 14 career starts.