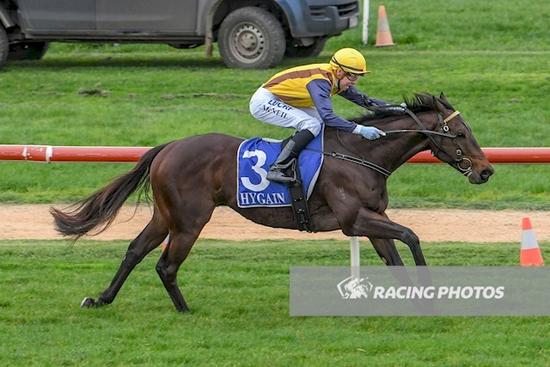 Despite being the trainer’s most unfashionably bred horse in the stable, Chas Marlow could have been mistaken for Might And Power in the manner he ploughed through the slog at Warrnambool this afternoon for trainer Tony Noonan.

Making the win even sweeter for Noonan was the fact it was long-time supporter Graeme Ward who had always labelled Chas Marlow as his “project horse”.

“This horse is owned by a dam good mate of mine who has been with me through the highs and lows.

“He bred this little horse and he’s been going alright. On those synthetic tracks he’s been [settling] back and today we decided to be a but more positive with him and it worked.”

Noonan was full of praise for apprentice Logan McNeil’s ride which was his first for the stable as well as McNeil’s Master - Mansfield-based trainer Gerald Egan.

“The kid rated the horse nicely. I was very confident getting to the corner.

“Gerald Egan - he should just be the only person in charge of apprentices because he does such a good job of it.”

Leading the field into the home straight, Chas Marlow ($20) gave a strong kick to open up a five length lead which proved the decisive factor as he held on by 2.25L from Holy Freeze ($2F) in Heavy 8 going.

It had been a long time in between drinks for the Mornington-based trainer with Chas Marlow's win being Noonan's first at The Bool since winning the Warrnambool Cup in 2003 with Gunnamatta.

“I don’t think anyone is still here that was there that day but it’s great to have a winner down here.”

The younger brother of senior rider Jye, McNeil has been riding for a few months with today’s win at the famous track is certain to be a memorable one for the 3kg claiming apprentice.

“He flew the gates and travelled nicely in the lead and they sort of left him alone which worked out perfectly for him,” said McNeil.

“He gave a kick at about the 300m and I knew he was home from there.

“I’m very appreciative of Tony for putting me on and I’m glad I could get the job done for him.”

Sired by the largely unknown stallion Widden Valley, Chas Marlow has now accrued more than $74,000 in prize money from his 16 career starts. Widden Valley remains at stud but with no advertised service fee, his last one being $2,200 in 2016 which delivered four live foals.