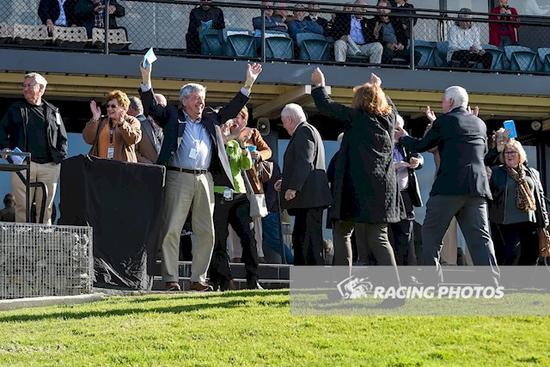 The picket fence is growing next to Annarbor’s name after she saluted for the third time in succession for Mornington-trainer Tony Noonan, who has his mare in rare air for the hundreds of Social Syndicates members who race her.

The third win in the space of a month, and fourth for her preparation, has Noonan singing the praises of owners who have been patient with the 5-year-old daughter of Excellebration and now reaping the rewards.

When queried as to how he turned the mare’s form around having not even ran a placing in her first 7 career starts, Noonan alluded to the time afforded to horses under the care of his boutique stable.

“Just loving them, looking after them. I think that's the key, especially with fillies. I’ve always had a lot of luck with fillies,” he said.

“She was a very difficult filly to start of with and has really developed into a lovely mare. She just relaxes so well and makes it easy.”

Having now saddled up 10 winners from his last 50 runners, Noonan has been enjoying an incredible run of form to start the new racing season.

“We’re having a good run and you get them. Unfortunately at the moment, we won’t have too many more because it will get a bit tougher but I’m very appreciative of the help I get from my staff and everyone.’

Jumping very well from an outside barrier in the field of eight runners under son and jockey Jake, Annarbor took up a forward position which was starkly different to her previous wins when settling back in the field.

With the 2000m affair being run at just a moderate tempo, Noonan elected to sit outside the leader Parallel World where his mount settled well on the Good 4 going before gradually creeping into the race by the 600m mark.

Cornering comfortably on her home track, Annarbor ($3.40F) quickly hit the front by the 150m mark where she stayed on well to hold a fast finishing Spensierto ($4.40) by half-a-length.

“I'm just lucky to be the pilot. He’d (Tony) be happy to remind me that too,” joked Jake after the win.

“We were going to go back and ride for cover whether it be second last or what not. But she flew the gates and I got there without any issue.

“The stable is in incredible form and credit to the staff. We’ve got great track riders, great stable staff and just the general vibe around the stable is really good so that’s feeding onto the horses and Dad’s got them fit, well and happy.”

The win was the fourth of Annarbor’s career with all four coming since June, taking her career earnings now beyond $95,000.

Social Syndicates is an ownership program which Tony Noonan Racing offers to social group and sporting club members who can race a horse with the stable from as little as $10 per month.

For more information about how you can get your group involved with a Social Syndicates horse, please email Gemma Lambe on gemma@tonynoonanracing.com.au.