Our Free Spirit kicks off prep in style, leading all the way at Mornington 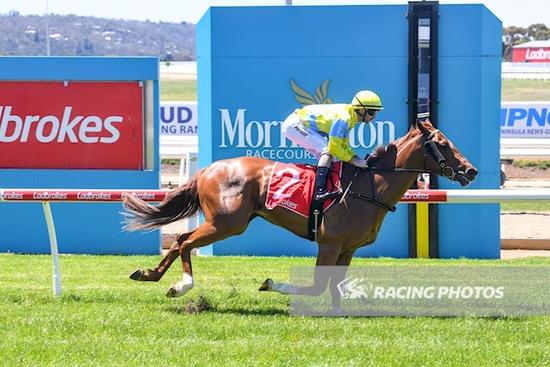 In a race he was originally a despised outsider, Our Free Spirit made a mess of his opposition at Mornington this afternoon in the Peninsula Home Plater over 1000m to lead all the way for local trainer Tony Noonan.

With Our Free Spirit breaking through at just career start number two, it took Noonan several minutes to make his way down to the winners circle at his home track where he was surrounded by a big group of owners.

“They've been patient group which is a precursor if you've got a horse with me,” joked Noonan.

“It's a great thrill - I trained his mother. We bought this horse as a yearling and I’ve always liked him.

“He’s just been a big, awkward type of horse but we’ve just looked after him. He’s had some nice trials undeenreadth him coming here today and I’d expected him to run well.

“He isn’t terribly smart but he’s honest and tries hard so with those qualities, he’ll keep improving.”

Jumping well from barrier 5 in the field of seven runners and with son Jake Noonan aboard, the 3-year-old Unencumbered gelding jumped well before being eased over to the fence to lead the field up.

Travelling well in the Good 4 conditions under a hold, Jake gradually offered his mount more rein as Our Free Spirit ($6.50) rounded the home turn to pinch a 3-length lead at the top of the straight.

Under hands-and-heels riding, Our Free Spirit kept extended to open up a 6-length lead before being eased down by the 25m mark for what was ultimately a soft win ahead of the fast-finishing La Zola ($4) in second.

“He was good. We probably thought he would be three-wide or something like that but he began that quickly, he just landed in front,” said Jake after the win.

“Mornington trained horses here is a massive advantage. When he found the rail, he had something to guide him and it was good.”

Our Free Spirit is the second foal out of the mare Our Spirits Bay which was trained by Noonan for Peter Lowe who has retained an interest Our Free Spirit.

Purchased by Noonan for $26,000 in 2018 at the Inglis Melbourne Premier sale, today's win earned connections a total of $21,050 in just Our Free Spirit's second career start.