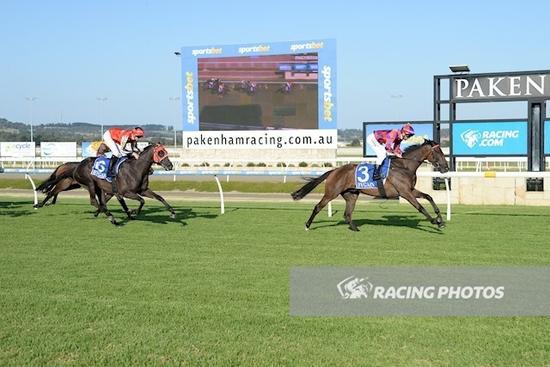 The Tony Noonan stable continued its strong run of wins through Summer with Shockingly surging clear for a strong victory at Pakenham this afternoon over 1600m, breaking his maiden 3rd-up in what was ultimately a fairly soft win.

But despite not having run a placing in his six career starts prior to today, Noonan was confident that it was only a matter of time before Shockingly would break through.

“This horse has been slow to get going but his pedigree suggested that was always going to be the case. He’s always shown good ability at home and it's nice to see tonight where he’s put it all together,” said Noonan.

“I don’t think the breed are easy. If you put a mix of Shocking and Pentire together, it’s hard work.”

Although stretched out to 1600m for the first time this prep, Noonan suggested that Shockingly is still not fully wound up.

“He’s still a long way off it. He’s still got to physically just fill out a bit more but he’ll stay all day so we’re going to have a lot of fun.”

Jumping well from barrier 1 in the field of 8 under son and jockey Jake Noonan, Shockingly ($12) took a sit in running, holding the rail just behind the leaders.

With the field running along at a genuine tempo, Jake put the 4-year-old Shocking gelding to sleep before gradually easing away from the rail prior to straightening.

As the field compacted, Shockingly eased off heels to work towards the centre of the track where he let down with a strong turn-of-foot to hit the lead by the 150m mark under soft riding and was extending away from the field before Jake ease him down to score by 2.25L ahead of Fiftyonestates ($6).

Following the soft win, Jake suggested there was still plenty left in the tank of Shockingly.

“The plan all along coming into today and from the start of the prep was just to teach this horse to find a rhythm because by Shocking, he’s got the pedigree, ability and stamina to run probably a good 2500m.”

“We’ve just been drilling that into him, riding him cold and getting him to settle.”

The victory however was not without drama after Shockingly was a late scratching on Sunday when accepted for a 1700m race at Geelong. On his way to the races however, the Noonan stable was caught in heavy traffic which unsettled Shockingly before being scratched upon his arrival at racecourse by order of the stewards.