Sanctuaire breaks run of placings with dominant win at Ballarat 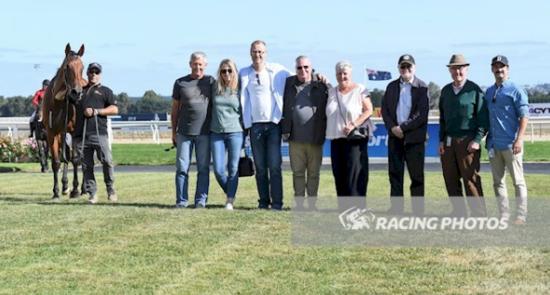 After having five of his last seven starters run 2nd, it was a welcome sight for Mornington-trainer Tony Noonan at Ballarat this afternoon when Sanctuaire surged clear for a dominant win in the Hygain Winners Choice Handicap over 2000m.

But with Noonan at the Inglis Premier Sale, the task was left to his sons Tom and Jake to go one better than the stable’s string of runner-ups.

“I don’t think I could have gone home and faced Dad if I had another second,” said Foreman,Tom after the win.

“The idea was to get some cover and she did that. I was a little bit worried that they were going at a walking pace but to his credit, he (Jake) just used his instincts, got her to the outside and got her home clear."

Jumping well from barrier 5 in the field of 11 with son Jake Noonan in the saddle, Sanctuaire just held her position forward of midfield as Polisher crossed the field from a wide alley.

With the leading group dropping anchor down the back straight and pulling any tempo out of the race, Jake remained calm and kept Sanctuaire in a settled rhythm.

Passing the 1000m mark as several midfield runners attempted to put some pressure into the race, Sanctuaire was temporarily shuffled back before Jake tacked onto Laughing Heir to get a lovely trail into the race.

Still just cruising through the bend with cover, Jake gradually angled into the clear at the top of the straight where Sanctuaire ($12) let down with a strong turn-of-foot to hit the front passing the 100m mark and comfortably extending on the line for a soft 2.25L victory.

Like his older brother, Jake was relieved to be taking off the saddle in the winner’s stall.

“Before we came out here, I said if we get any more seconds, we’re going to have a minute,” chuckled Jake.

“Credit to this mare, and the owners to be fair. The owners have been very patient and she’s starting to put it all together and put the score on the board now.

“It’s taken probably nearly three preps to really mature as a filly and mare herself, and also get out in trip.

“We found a lovely spot. They didn’t go that true of a gallop. The thing in front of me handed it up and it just shuffled us back.

“I was fortunate that Campbell (Rawiller) just kind of took off and I was able to get her into clear galloping room then and build on a run when I need to.

“She’s finally staying a trip that we should she would and now that she is, we should hopefully see her progress through the grades.”

Today’s win was the second career victory for Sanctuaire, a 5-year-old mare by Animal Kingdom, and took her career earnings beyond $55,000 from 17 starts.