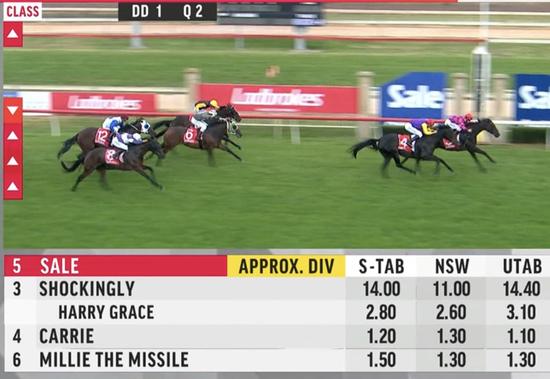 Favourite-backers could only watch on in shock after apprentice Harry Grace produced a gem of a ride aboard Shockingly to hold out the odds-on favourite at Sale for Mornington-based trainer Tony Noonan.

But with all those eyes on Japanese import Carrie ($2F), it was Grace that took all the accolades with his instinctive ride to send Shockingly forward from a wide gate which had even Noonan, a trainer of 30 years experience, impressed after the win.

“It was a bloody beauty,” said Noonan.

“Harry hasn’t long been with us but he’s been riding out with us. We’re just waiting for his [apprenticeship] papers to be transferred.

“He’s been working hard at home and that was a good reward but a really good ride.”

Jumping well from barrier 8 in the field of 11, a lack of early tempo in the early stages of the 1700m affair prompted Grace to settle forward of midfield but posted three-deep down.

Holding his position whilst exposed, the tempo gradually picked up which enabled Grace to slot in prior to the first bend which enabled Shockingly to hold his forward position with cover, despite the initial wide draw.

As the tempo was sustained, Grace travelled effortlessly aboard the 4-year-old Shocking gelding where their forward position enabled him to save plenty of ground has he angled out at the top of the straight.

With most eyes watching Regan Bayliss aboard Carrie which has circled the field, the Japanese import quickly ambled up to Shockingly ($14) as the two paired off eye-to-eye at the 100m mark before Shockingly fought back strongly to edge out the favourite by a neck on the line.

The win was the second of Shockingly’s prep and took his career earnings beyond $44,000 from 9 career starts.