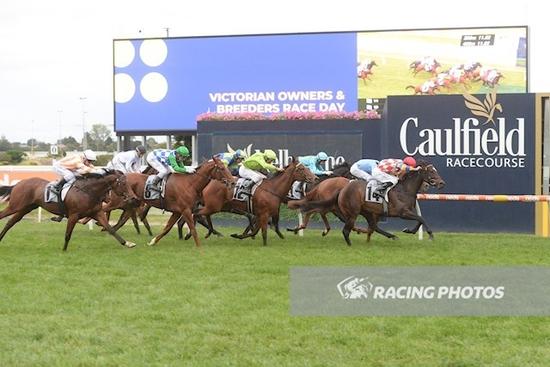 Despite it being a boilover for punters, connections of Florent were quietly confident that their filly was up to the task when surging to victory at big odds in the $427,000 VOBIS Sires Guineas over 1600m at Caulfield for Mornington-based trainer Tony Noonan.

With more than 30 years of experience to his name, Noonan took an unusual route to the Guineas, backing Florent up from a race three days earlier at Geelong when finishing 5th in the 1400m race.

“This is something that we’d targeted and we went an unusual way running her on Wednesday. She ran really well there and we were quietly confident going into it,” said Noonan.

With son Jake in the saddle, the win was even sweeter with Jake having done plenty of hard yardage around the State on the country scene, before producing a peach of a ride for his father who gave him some words of encouragement from the mounting yard.

“I told him he had to lift into this one. I can’t swear but it was an old footy coach rev up.”

“He just sat in the box seat, it’s just amazing what barrier draws can do. She drew well, got into a good forward position. You wanted to be on her a long way out.”

Jumping well from barrier 6 in the field of 14, the younger Noonan just held his position forward of midfield, one off the fence. Cruising behind the genuine tempo, Florent settled effortlessly before Noonan started working into the race by the 500m mark.

With Florent still travelling, Noonan eased into the 4-wide line where Florent ($51) ambled up the leader by the 250m mark and let down with a strong turn-of-foot and put the race to bed by the 100m mark holding off Leale ($31) by half-a-length working into 2nd and Affair to Remember ($3.40F) in third.

The win was the second of Florent’s career and took her earning over $280k from 10 starts for the Fiorente filly who was a $22,000 purchase from the Magic Millions March Yearling Sale.