Steel of Madrid to commence dressage with budding young rider 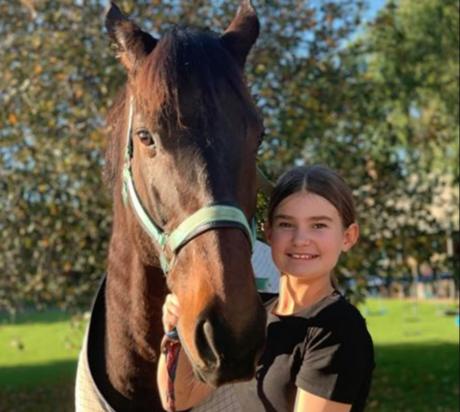 Following retirement from the track earlier in the year, 6-year-old gelding Steel of Madrid is set to embark on his post-racing career under the tutelage of his long-time track rider Mariah Kaminski and her niece Indi (pictured).

Well known in racing circles, Mariah manages Moorooduc agistment property Stonewood where she had personally been overseeing Steel of Madrid for the past six months.

Having unfortunately sustained an injury in his last race start in October 2019, connections were in agreement that the best thing for the horse would be to perform arthroscopic surgery which would ensure an opportunity to be re-trained and a pain-free life.

Being the regular rider for Steel of Madrid who was trained by Tony Noonan to win three races and almost $100,000, Mariah wanted to ensure the Thoroughbred had fully recovered from surgery before commencing the process of finding him a forever home.

After five months in the paddock after the surgery, Steel of Madrid commenced light exercise before Mariah jumped in the saddle to ensure the 6-year-old had physically recovered and would be safe for other riders. Within weeks, Mariah was so pleased with how Steel of Madrid was handling dressage work that she made the decision to re-home him herself, as a gift to 11-year-old niece Indi.

Confident in the early signs Steel of Madrid has shown in his post-racing life, Mariah will now work closely with the gelded son of Lope De Vega and Indi who has aspirations to one day compete on the dressage circuit herself.

Tony Noonan Racing looks forward to keeping Steel of Madrid’s connections up to date with his post-racing career.