Kimberley Spirit toys with the competition at Moe for dominant win 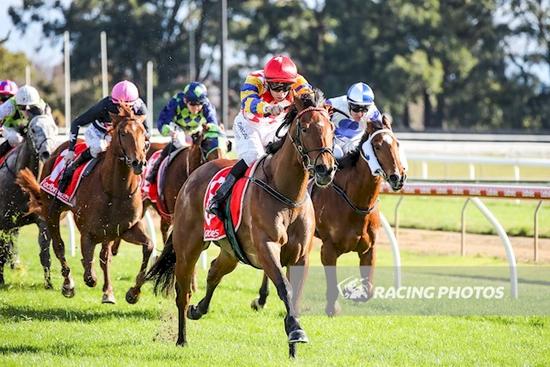 The fillies at Tony Noonan’s Mornington stables have continued a raging hot streak, churning out another winner this afternoon at Moe when Kimberley Spirit won the Nextra Moe Maiden Plate over 1100m in emphatic style.

With the final margin on the line being 4 lengths, Noonan was delighted the filly delivered on the impressive work he had been seeing from her at home.

“We were quietly confident. We are always of the opinion that the filly had good ability,” said Noonan.

“But as most of the runners there today, we were just a bit concerned about her ability to handle the Heavy track but she got a lovely ride and was able to blow them away.

“It’s terrific for the owners. She’s 3, nearly 4 and they’ve been very patient but we were always confident about her ability.

“She’s just been a little bit soft and immature so it's taken a little more time to get her there but I think they’ll be pretty pleased with the result today.”

After the dominant win where the 3-year-old Wandjina filly was first-up from a spell in just her third career start, Noonan anticipates there to be more wins on the horizon for Kimberley Spirit.

“She was very strong getting to the line. Her pedigree suggests she should get out a bit more of a trip.

"She really toyed with them there.”

Making the win even better was the terrific return Noonan is getting from his 2nd and 3rd crop of foals with sons Jake in the saddle and Tom saddling up at Moe as the stable’s Foreman.

“He’s not getting many rides the boy (Jake) but he keeps riding for me and I'm happy he rode a winner for me yesterday and one today.

“They’re going head to head at the moment in terms of who is on top of the will.”

Jumping well from barrier 4, Jake had Kimberley Spirit positioned behind the leaders in running before angling out at the top of the straight where there was slight contact. But once he got her into clear running, Kimberley Spirit ($14) exploded clear for a very impressive 4L win.

The win continued the stellar run of form coming out of Noonan’s fillies barn which has included metropolitan wins from Florent in the VOBIS Gold Guineas and Beatrix at yesterday.