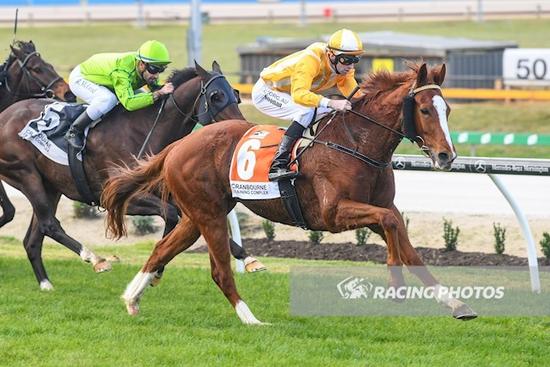 Mornington-based trainer Tony Noonan has continued a stellar run of late alongside his sons Tom and Jake with the trio combining for third third win in seven days after Toff Choice powered over the top at Cranbourne this afternoon to break his maiden.

The win came at career start number five for the 3-year-old gelding by Toorak Toff who secured a lucrative Super VOBIS bonus attached to the race.

“He’s lucky he's owned by a very good owner who has been extremely patient with this horse," said Noonan after the win via telephone.

“He’s a home-bred and as you can see he’s a big striding horse, just a tad immature. Frank was good enough to follow our advice as far as just easing off him after his run at Sandown and hopefully come in at the back end of the 3-year-old season and winning a race or two.”

Despite opening at $6 when markets were put up on Wednesday, there was strong support late for Toff Choice who started as the $3.30 favourite but it wasn’t the trainer’s money with Noonan slightly concerned about having to jump from barrier 13 in the field of 14.

“I hate bad barrier draws. That always just deflates you a little bit.

“I thought if he’d drawn nice, he's got good tactical speed for a horse that's going to get out to a trip. I just thought if we’d drawn tidier, I would have been more confident.”

Despite jumping well with Noonan’s youngest son Jake in the saddle, Toff Choice gradually eased back to settle backwards of midfield as Jake sought cover through the tight-turning Cranbourne bend.

With Toff Choice handling the Soft 6 conditions effortlessly, Jake gradually eased Toff Choice into the race from the 500m mark, before presenting 5-wide at the top of the straight but with clear running.

Once balanced up, Toff Choice quickly gobbled up the five length lead he’d been spotting the leaders by sustaining an impressive turn-of-foot down the centre of the track to score by 1.25L.

As the veteran Noonan watched on from afar whilst taking some time away from the stable, Foreman and eldest son Tom was full of excitement in the winner’s stall, quietly reminding Racing.com media who'd been saddling up all the recent Noonan winners.

“He’s (Tom) been in charge the last couple of weeks. I think that's our third winner in the last seven days or something so he deserves bragging rights. He’s been working hard and they’ve done a good job.”