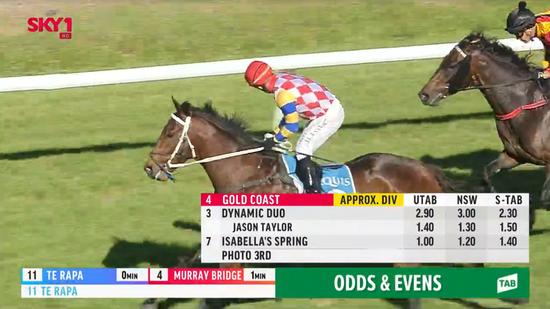 Eagle-eyed punters that noticed Mornington-based trainer Tony Noonan sending one around on the Gold Coast were well rewarded as Dynamic Duo produced a withering turn-of-foot in what was ultimately an effortless win.

1,770km may have been a long way for the Victorian conditioner to travel for a country maiden but the win came as no surprise to Noonan who has loftier ambitions for Dynamic Duo.

“Everything we’ve seen from this horse at home suggested he was city class but he’s had a bad run of luck where he kept striking wet tracks,” said Noonan.

“We’ve had a lot of success sending horses up to Queensland to spell over Winter where they just do so well with the sun on their back.

“We devised this plan with Ray Green who races Dynamic Duo with his grandson and they were happy to keep the horse in work for one more run.”

The win may have been a fortunate one for connections with the 3-year-old colt by More Than Ready engaged at Sunshine Coast last week before the race meeting was called off due to visibility concerns just minutes before Dynamic Duo was set to run.

“I’m thrilled for Ray who has been patient with the horse who has been a tad backwards but he’s been a terrific client for a long time so it’s great to get the win for him and the family.

“Andrew Kermond has done a terrific job with this horse and others I have been campaigning in Queensland this season. He had the horse looking perfect today.”

Jumping well from barrier 1 in the field of 11 with Jason Taylor in the saddle, Dynamic Duo was marginally tardy out of the gates before Taylor railed up to settle forward of midfield on the rail.

After being backed from $6 into $3, punters may have been nervous as the field entered the straight where Dynamic Duo was in a tricky position along the fence, spotting the leaders around six lengths. But once Taylor worked off the fence into clear running room, Dynamic Duo let down with thundering acceleration coming home 2-to-their-1, hitting the front by the 50m and extending on the line to score by 2 lengths ahead of Isabella’s Spring ($2F).

The win continued an impressive run of form for Noonan who has had 4 winners in 10 days.