Elite Legacy refuses to lie down for tough win at Sandown 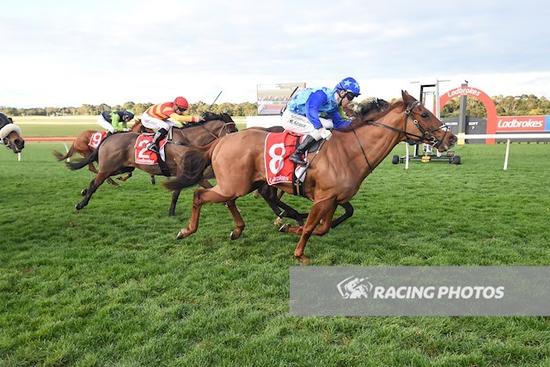 Connections had to survive a protest by the runner-up but once dismissed by stewards, Elite Legacy made it back-to-back wins to continue a stellar run of form for himself and Morington-based trainer Tony Noonan.

Coming right down the outside rail and there to be beat, Noonan was most pleased with how Elite Legacy kept finding plenty to hold off the swarm of late challengers with the stable’s apprentice Harry Grace onboard.

“What I like about him is he doesn't win by big margins. He’s there to be beaten and he keeps trying,” said Noonan after the win.

“Harry having a 3 kilo claim was a big help for him. I was pleased for Harry who has been with us for a short while. He’s working hard and deserved that win.“

Jumping well from barrier 13 in the field of 14, Grace tracked a wide path in transit to ensure Elite Legacy would be able to take advantage of the track bias where all winners on the day had been coming down the outside.

A proven mudlark, with all career wins to date having come on Soft going, Elite Legacy was cruising in the Soft 7 conditions before Grace angled towards the outside rail upon straightening.

Once in clear running, Elite Legacy made quick work of the 3 length lead he’d been spotting the leaders before hitting the front by the 150m mark. As backmarkers looked to be gathering momentum down that outside lane, Grace looked to be in trouble before asking the horse for another effort where Elite Legacy ($5) responded gallantly to hold Excalabration ($19) on the line by a nose.

With the small margin, rider Crag Williams on the runner-up reviewed patrol footage before lodging a protest alleging interference in the home straight.

As connections bit their fingernails while broadcaster Racing.com cut to footage at Murray Bridge, news came through quickly after the Adelaide race of stewards dismissing the protest and declaring correct weight.

Today’s win was the 6th of Elite Legacy’s 21 career starts where he has now earned more than $148,000 for connections which could increase further considering the 5-year-old Lope De Vega gelding is just three runs into his Winter campaign which has netted two wins and a runner-up placing.