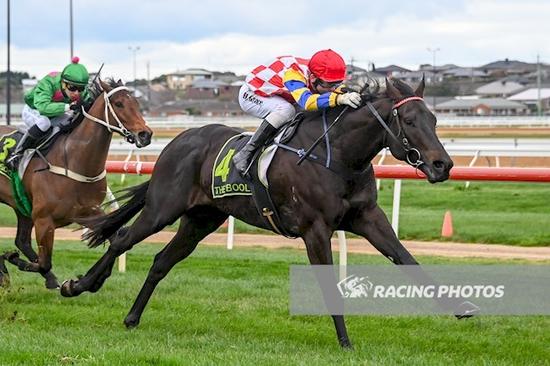 He may have been ducking and weaving in the straight but an immature Southern Lights relished the Heavy 10 conditions at Warrnambool to surge clear for a comfortable victory over 1000m on raw ability for Mornington-based trainer Tony Noonan.

Still green in his racing, it would have been easy to confuse the 3-year-old Zoustar gelding with a juvenile but Noonan was pleased for his patient group of owners after the injury-plagued horse was able to break through for his maiden win at his fourth career start.

“We always had a high opinion of the horse but he’s had a lot of issues,” said Noonan after the win.

“Credit to all the owners. It's been a very frustrating period with the horse but he’s a lovely horse. We’ve had to go very steady and slowly but I think in these sort of conditions, he’s very adept.”

Noonan was particularly pleased with the ride by stable apprentice Harry Grace whose horsemanship was tested when Southern Lights attempted to lay in once he’d hit the front.

“I’m very lucky at the moment to have him. He was apprenticed to Robbie Laing for a long period of time. Robbie did a great job with him and I got him at the right time.

“To have a kid with that ability to claim 1.5kg in the bush and 3kg in town, he rode a winner for me at Sandown yesterday.

“He's a good worker and a good kid. It wasn't an easy ride.”

Jumping evenly from barrier 9 in the field of 12 over 1000m, Grace initially sought to go forward out of the gates before runners drawn inside of him kicked up.

With those inside leaders trucking along at a genuine tempo, Grace eased back to settle midfield where he found cover whilst still staying wide on the track in what looked to be better going.

Appearing under pressure by the 500m mark prior to straightening, Grace had to get busy on Southern Light to have him pick up the bridle but the horse responded well to start making ground to circle the field. Hitting the front by the 200m mark, Southern Lights ($5.50) layed in sharply once clear of the field before Grace steadied the horse again at which point he’d kept running to score by a comfortable 2.25L on the line.

The win continued Tony Noonan stable's stellar run of form as their 8th winner in the past five weeks.