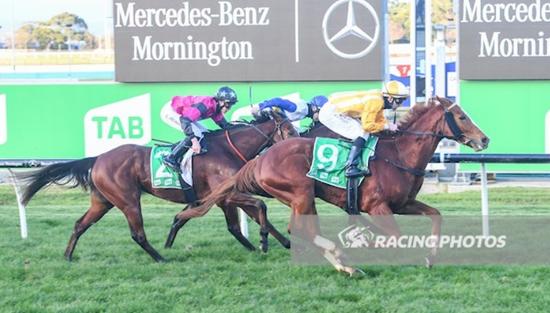 Having ended the season last week with his stable runners amassing more than $1.1 million for connections, Mornington-based trainer Tony Noonan has opened his seasonal account with Toff Choice - his fourth runner in the new season - storming home from the back to win at Cranbourne.

It followed a very similar performance last month when Toff Choice produced a near-identical performance to rocket home at Cranbourne also, when breaking his maiden two starts back.

“I like the way he finds the line,” said Noonan after the win.

Despite jumping from the wide alley of barrier x in the field of y, stable rider Jake Noonan settled Toff Choice out the back where the 4-year-old Toorak Toff gelded travelled comfortably in the conditions.

With cover through the back straight, Jake gradually worked Toff Choice through the gears to commence a searching run from the 600m mark where he was given a trail into the home straight before Jake presented towards the centre of the track.

Despite giving 6 lengths to the leader at the top of the home straight, Toff Choice ($3.30F) continued surging off the long run to continue building momentum to hit the front by the 25m mark and kick clear for another impressive win.

Today’s victory was Toff Choice’s 2nd from just 7 career starts and took his earnings past $55,000 for owner-breeders Frank and Pauline Carnovale.