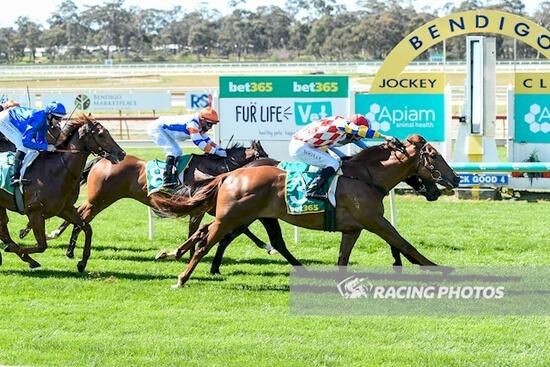 Mornington-based trainer Tony Noonan looks to have unveiled a very smart colt at Bendigo this afternoon when Hickok rocketed home from the tail of the field to win in most-impressive fashion when resuming over 1100m.

Most pleasing for Noonan was the group of stable clients that race the 3-year-old Colt having just his third career start after racing twice as a juvenile for one placing.

“We've got a really good group of people that have been with us for a long while,” sain Noonan.

“They're a good lot of mates so it's always nice to get a result when you’re surrounded by friends.”

Jumping well from barrier 9 in the field of 11 with Noonan’s son Jake in the saddle, the veteran conditioner was slightly concerned mid-race when Hickok settled in running with just one runner behind him.

“I was worried. I thought we just got a little back a little bit further than what was planned.

“Once he got out and got a bit of room, got balanced, I was hoping that line wouldn't come up too quickly because I knew he would hit the line strongly.”

Strong indeed was Hickok’s ($8.50) finish as he spotted the leader 8 lengths upon straightening before letting down with a booming turn-of-foot to get up with his last stride, scoring by 0.1L from Fixated ($4.60) and Sensational Reward ($5.50) in third.

Eagle-eyed punters were given a lead into Hickok having noticed the Colt still holds a nomination for the Caulfield Guineas, indicating the stable’s confidence in the Shooting to Win Colt’s ability.

When queried as to whether a Guineas campaign was still on the agenda, Noonan remained tight-lipped indicating Hickok would need to “keep winning” to warrant it.