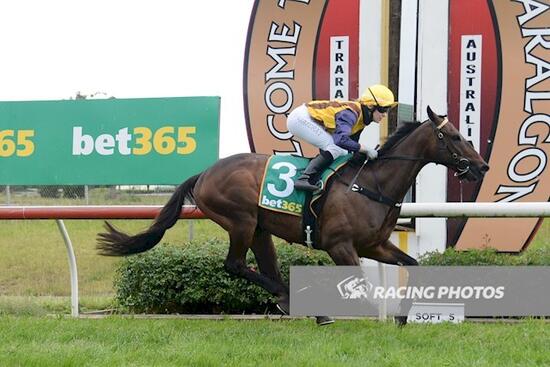 A win on Derby Day is still a win, even if it came 174km away from Flemington festivities with Chas Marlow proving too speedy to run down when leading all the way at Traralgon for Mornington-based trainer Tony Noonan.

With the win, it took Chas Marlow’s earnings past $92,000 which means a six figure milestone is now within the sights of connections who have always classified Chas Marlow as their ‘Project Horse’ given his unfashionable breeding.

The win also continued a quirky connection Chas Marlow has with apprentice jockeys who have been aboard in three of his four wins where Celine Gaudray timed the ride to perfection today.

Jumping well from the gates, 4kg claiming apprentice Gaudrey worked Chas Marlow to the front where he settled outside the leader with those two runners putting up a 10 length margin back to third in running.

Upon cornering, Gaudray offered the 7-year-old Widden Valley gelding a bit more rein as he quickly dropped off his fellow leader to put up a handy margin.

As the field started making ground, Gaudray kept Chas Marlow ($7) kicking to score a comfortable 2L win on the line which also brought up a double for Gaudray who is apprenticed to fellow Mornington trainer Pat Carey.

Adding to another quick, today’s win at Traralgon was the first of Chas Marlow’s not to come at a track starting with ‘W’ with his previous wins having come at Wangaratta, Wodonga and Warrnambool.

In the final campaign of his racing career, Chas Marlow now firmly has his sights on breaking the $100,000 barrier.