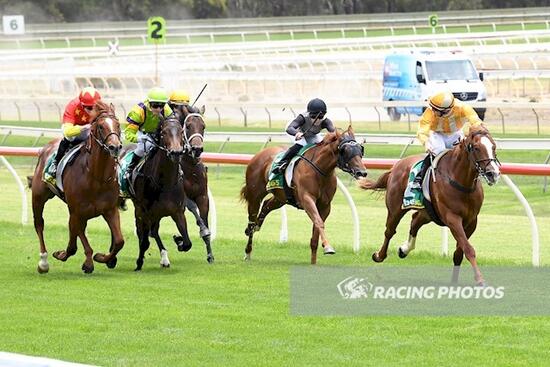 Mornington-based trainer Tony Noonan has unearthed a very smart colt at Bendigo this afternoon when Rusheen scorched the turf in blistering time to win on debut over 1000m.

For Noonan, who admits he rarely pushes 2-year-olds to the races this early in the season, he knew he had a handy one at home despite a very ordinary jumpout in October.

“At this first little jumpout, he finished 100m behind them. He just had no idea but he’s just got a tremendous attitude,” said Noonan after the win.

Things haven’t quite gone to plan for the Toronado colt though, with Noonan scratching Rusheen from Sandown last month after the colt pulled up sore from a gallop.

But through careful management with the assistance of stable vet Dr Marcus Valmadre and some time spent on the water walker, Noonan was able to alleviate that soreness and now plans to push on to bigger races with Rusheen taking home $41,650 for today's win courtesy of Super VOBIS and VOBIS Gold bonuses attached to the race.

“Rory Hunter, who looks after him, took the $110 in the Blue Diamond before today so I think that was a smart move.

“We’ll see how he pulls up. Ideally, he’ll go to Caulfield on Boxing Day.

“He’s a really strong robust sort of colt. He’s got a good attitude and he eats like a good horse so we’ll give him every opportunity to take advantage of his natural ability.”

Jumping well from barrier 5 in the field of 7 with Noonan’s son Jake in the saddle, Rusheen made use of his good tactical speed to press forward, settling outside the leader at a good tempo.

Cruising into the race as the leader came under pressure, Jake casually slipped Rusheen more rein under hands-and-heels riding for Rusheen to break clear by the 200m mark where he kept coming on the line for an impressive 1.75L win in a very slick time of 0:57.81.

“He’s always shown us good raw ability at home. He’s actually taken everyone that he’s done onboard and come on after every gallop and trial,” said Jake.

“He got a little bit on the bridle from the half-mile just being a bit raw and running through the bridle but from the 600.

“Even though we were going at good fractions, he actually just idled underneath me and had a good little think about things. That just gave us a chance to fill the lungs up a bit more because being first up and being a colt, he’s always going to take improvement from the run a be a bit vulnerable late but he was able to have a little breather there and his raw ability kicked in and he’s got good potential.”

Rusheen was a $60,000 yearling purchase by Tony Noonan at the 2019 Inglis Classic Sale and holds nominations for the Blue Diamond and Golden Slipper.