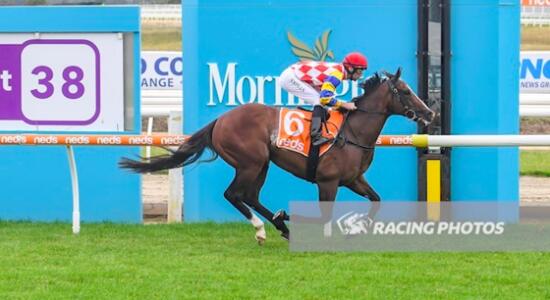 To say Mornington is a happy hunting ground for Raven’s Blaze may be an understatement after her dominant win this afternoon for local trainer Tony Noonan, her fourth at the track and fifth overall.

Despite the impressive all-the-way win, Noonan was pleasantly surprised to see her ultimately win with such ease having jumped from a wide barrier.

“I was concerned about the gate. When you're a trainer you always find a reason they can't win rather than reasons they can,” said Noonan after the win.

While Noonan was less confident in the chances of Raven’s Blaze before the run, he was full of praise for son and stable jockey Jake Noonan who was more upbeat.

“He rode it well. He thought it was his best ride for the day so he’s a good judge, it's just a shame about the trainer.”

Racing first-up having last raced in October, the younger Noonan jumped the 6-year-old Captain Gerrard mare from barrier 9 in the field of 9, aided by five scratchings which significantly reduced to field size.

Despite the wide draw, Raven’s Blaze bounced straight to the lead where she was able to cross the field and find the fence at her home track.

Opening up a lead of 3 lengths entering the home turn, Raven’s Blaze railed like a greyhound to extend her lead upon straightening with Jake just sitting pretty before easing the mare down on the line for a soft 2.5L win.

The victory, the fifth of Raven’s Blaze’s career, took her earnings beyond $185,000 for owner-breeder Joanne Spears who races the mare with friends and family.