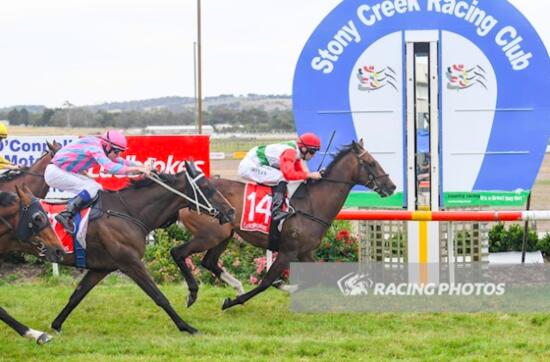 Mornington-trainer Tony Noonan will be hoping more race meetings are held at Stony Creek in the coming 12 months after one of the State’s most consistent place-getters went one better to score his second career win, both of which have now come at Stony Creek.

It was a welcome sight for Noonan who has now saddled Governor Landy up on 28 occasions for 2 wins and 16 minor placings.

“He’s really been much maligned but an honest little horse,” said Noonan after the win.

“He’s only little which has been half the problem. He’s had a tendency to want to over race and he was bred to run two mile but struggled to get much further than 1100m.

“He’s owned by a terrific group of people that have been very faithful to him and they would have got a great thrill from seeing him salute for the second time at Royal Stony Creek.”

Jumping well from barrier 1 with son Jake in the saddle, Governor Landy jumped evenly to hold his position where he landed in a plumb spot behind the leader.

Cruising into the race, Jake gradually eased off heels where he was able to angle into clear running at the top of the straight where Governor Landy made quick work of the 2L margin, hitting the front by the 100m mark and surging clear for a soft 0.75L win on the line.

Upon his return to scale, Jake was delighted to get the 6-year-old Reliable Man gelding over the line again, having previously been aboard when Governor Landy broke his maiden at the track.

“Barrier 1 helped. Barriers are vital, especially at these sort of tracks,” said Jake.

“This horse is ever so consistent. He never runs a bad race which can be terribly frustrating because he’s only won the two now but he’s won here before, drew the right gate, had the right run and got out at the right time. It just mapped perfectly for him.”

With his unblemished record at Stony Creek, the stable may now consider a quick 9-day backup into the next meeting at Stony Creek which only hosts a handful of meetings per year.

Although today was only Governor Landy’s second career win, he now takes his earnings beyond $93,000 having accumulated the bulk of it through consistent minor placings.