He’s finally Run Away from them! 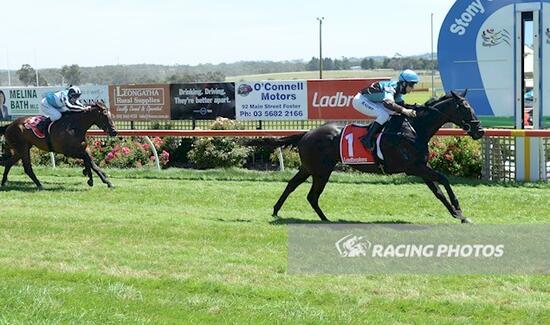 As one of the highest-earning maidens in Australia, He’s Run Away has finally shed his maiden tag with an emphatic win at Stony Creek this afternoon having recorded 7 previous runner-up placings for Mornington-based trainer Tony Noonan.

The victory was long overdue given many of those placings had been behind horses that went on to much better races with Noonan giving particular praise to stable apprentice Harry Grace who was in the saddle today.

“He rode him a treat. He’s a horse that seems to be just better off chasing. The plan was to be patient and don’t get there too quickly and he rode him to the letter,” said Noonan after the win.

“Timmy Harrison who owns the horse, he bred the horse in New Zealand and he’s been hanging out for a win. We’ve been close so many times so I’m rapt for Tim and rapt for the staff that have worked hard.”

With He’s Run Away having been quite a backward horse, being by Derby winner Polanski out of a Pentire mare, Noonan has always been confident that distance ranges like the 2100m today is where he would see the horse at its best.

“There’s not a lot of him condition wise so we’ve spent most of his preparations just trying to build him and strengthen him.

“He’ll get further and it's just a matter of trying to nurture the horse and get him to a point where he can do what he did today.

Jumping well from barrier 1, Grace held his position in the early stages of the race as Penso A Lei pushed hard to cross He’s Run Away from a wider barrier, giving Noonan’s 5-year-old gelding the ideal run in transit behind the leader.

As the field quickened by the 500m mark, Grace carefully edged away from the fence where he was able to come off the leader’s heels upon straightening. Once into the open air, He’s Run Away ($3.30F) let down with a booming finish to hit the front by the 100m mark and continue extending on the line for a well-deserved 3L win.

Despite today being the first victory of He’s Run Away’s career, it took his earnings beyond $80,000 thanks to his bevy of placings and the Super VOBIS bonus attached to today’s win.