Another winner for Team Noonan as Promada impresses on seasonal return 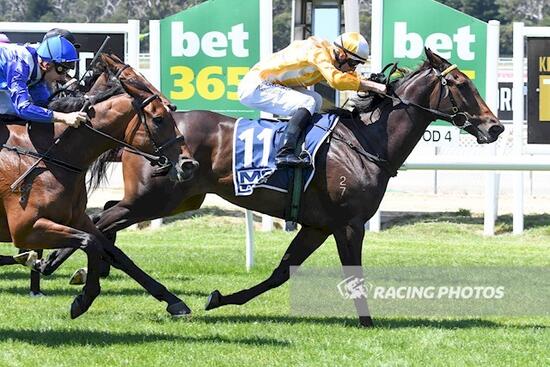 With the third winner from their last six runners, Tony Noonan’s Mornington-based stable is in a rich vein of form with Promada breaking her maiden this afternoon at Kilmore when first-up from a break in just her third career start.

Despite Noonan being at the Inglis Premier Sale conducting yearling inspections, stable representative Jess Weekes relayed the stable’s confidence in Promada’s ability after the win.

“He always thought she’d run well today. He wanted to get the maiden out of the way and now she’s done it,” said Weekes.

“He said to me before the race that she just needed time and he’s taken her time with her and she’s got the job done today.”

Jumping well from barrier 10 in the field of 11 with stable jockey Jake Noonan aboard, Promada was able to come across from her wide gate to settle perfectly in running, one-out-one-back.

Travelling effortlessly by the 600m mark, Noonan eased off heels prior to straightening where she cornered just off the leader before balancing up and hitting the front by the 100m mark.

With others back in the field gradually making ground, the 3-year-old Proisir filly ($3.10F) found plenty when asked for an effort to keep kicking for a strong 0.75L win.

Upon his return to scale after the win, the younger Noonan was rapt to get the win but may have created some awkwardness at his next family dinner.

"I thought she’d just about win. My brother in law will be filthy [that] I didn’t tell him,” joked Noonan.

“They went quick early and spread them out enough that I was just able to slot in. She did a good job really because she got left in front a long way from home and it's a good climb here.

“She'd been trialling really good and her form stacks up from lasy prep at Benalla. She’s just really physically furnished into a lovely filly now.”