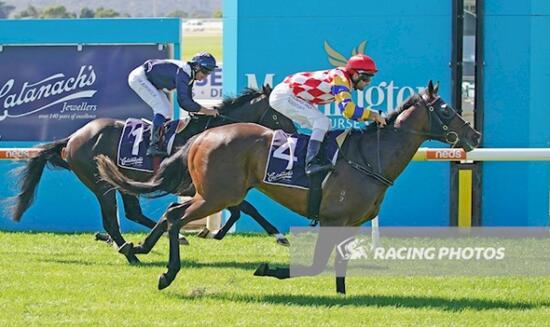 The gelding of Irish Impact may be the making of him having resumed first-up this afternoon since the procedure where he produced an almighty turn-of-foot to break his maiden at big odds for Mornington-based trainer Tony Noonan.

Admittedly, the victory was somewhat of a surprise given Irish Impact ($15) is bred to run over 2000m and beyond but proved sprightly over the 1200m trip today when coming from last and gobbling up the entire field for an impressive win.

“I would have to put my hand up and say it was a bit of a surprise,” said Noonan.

“Not a surprise in the sense that I think the horse has really nice ability but I just thought from the draw and the way he was going to be ridden might be a bit tougher.

“I might lose the horse over this because my interpretation this morning was conditioning and educational.

“His trials had been quite nice without asking too much of him. He’s out a Zabeel mare and has given every impression he’ll get a trip so this was just a perfect kickoff for him and to get a victory was even better.”

Jumping evenly from barrier 6 in the field of 8 with Noonan’s son Jake aboard, the 3-year-old Real Impact gelding settled at the tail of the field in running. With good speed towards the front of the field, Jake gradually worked Irish Impact into the race having been two lengths out the back where he got a lovely run trail through the corner before angling out at the top of the straight.

Once presented into clear running, Irish Impact let down with a powerful burst of acceleration on his home track to reel in the leader by the 50m mark and bound clear for a 0.75L win.

“I think this time around, he’s probably going to be looking for 1400m to a mile and he’s been trialing like that,” said Jake upon his return to scale.

“We just rode him in that manner like a horse looking for further and you can see in the run he wasn’t really comfortable keeping up that sort of tempo but the further they went, the better he travelled where he came off their backs and rounded off good.”

The win came at just Irish Impact’s third career start and took his earnings beyond $30,000.