A stayer on the rise as Domfiore dominates at Pakenham 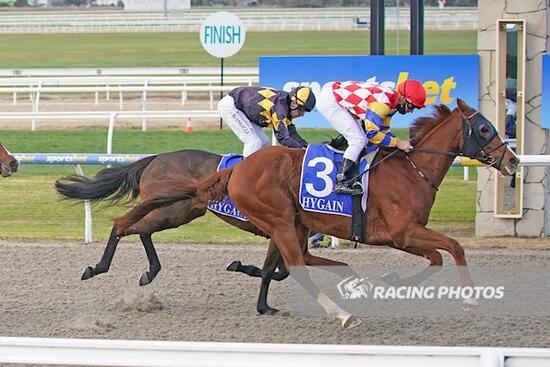 As a staying prospect on the rise, 3-year-old gelding Domfiore proved too strong at Pakenham Synthetic this afternoon when stepped up to 2200m by Mornington-based trainer Tony Noonan.

Jumping to the distance at just his fourth run of the prep, Noonan was delighted to get the maiden win for his loyal group of long-time owners with improvement in the horse still to come.

“This horse, he tries hard. He’s still got a long way to go but he’s owned by some terrific people,” said Noonan.

“The disappointment is that they’re not here because they are faithful and loyal and they would have been here cheering him on but that means one less beer for me on the way home.

“He’s a nice big horse by a good stallion, out of a Reset, out of a Sadler's Wells mare so he’ll run from here to Tokyo.”

Jumping well from barrier 2 with jockey Ben Melham onboard, Domfiore held his position from the gates before Melham found the ideal position in running, one-out-one-back.

Put to sleep down the back straight, Melham gradually eased Domfiore into the race from the 600m mark where he appeared to be cruising into the home straight as others were coming under pressure.

Ambling up to them and striking the front by the 200m mark, Domfiore ($1.65F) was still cruising to the line as Melham put the persuader away for an impressive half-length win which could have been much larger.

“He put the writing on the wall the other day and was better for a run at the trip,” said Melham after the win.

“He had the right run in transit. He’s obviously bred to run a trip and he’ll stay all day this horse. He was sort of only getting going, through the line.”

Originally entered for the Queensland Derby, Noonan pulled the plan on a trip north after Domfiore was narrowly beaten at Echuca last month over 2000m. Electing to stay at home, Noonan had originally accepted for a 2000m race at Wangaratta before electing to come to Pakenham Synthetic

“Guru Bob in Tim Wilkinson who is the head honcho, he put a lot of pressure on me. I didn't sleep on Wednesday night because of the pressure,” joked Noonan.

“He told me this was a weak race. He was right as it worked out.”

Originally purchased for $32,000 from the Adelaide Magic Millions Sale, Domfiore’s career could easily have been based in Warrnambool had it not been for a phone call between old mates two years ago.

“Quinton Scott, a good old mate of mine and my mentor picked him out for me over in Adelaide at the sales and was keen about him so he’ll be excited watching him at home.”

With Scott and Noonan having regularly attended yearling sales and conducting inspections together for the past 30 years and Noonan not present in Adelaide on the day, Scott identified the Fiorente yearling as one he was most keen on, but possibly more suitable for Noonan. And from that phone call, a budget was set that landed Domfiore in Mornington when the hammer fell on $32,000.

After today’s win, Domfiore took his earnings past $40,000 from still just seven starts as a stayer on the rise.