Lucy brings up Dazzling double for Social Syndicates at Mornington 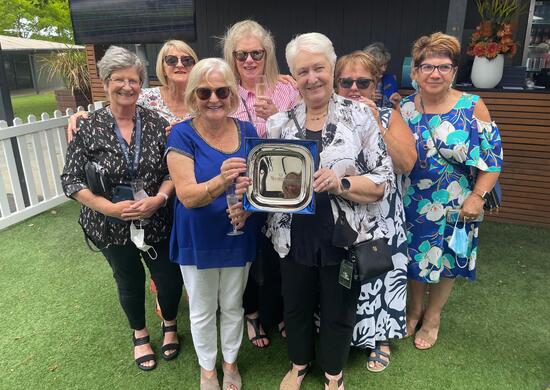 For most first-time racehorse owners, the thrill of their first win would last for weeks but in the case of those racing for the first time through the Social Syndicates program, that euphoria lasted just 30 minutes before Dazzling Lucy brought up a race-to-race double for Mornington-based trainer Tony Noonan.

With more than 100 owners on course as part of his Social Syndicates program, Noonan didn’t even have time to celebrate La Pluie’s maiden win before Dazzling Lucy lined up 30 minutes later to deliver the same outcome, breaking her maiden in just her second career start.

“What a terrific thrill for everyone involved, especially those that could be on course to celebrate their second win within an hour,” said Noonan.

“This filly is absolutely enormous and with that size, she’s had some growing pains which is why we’ve taken our time with her and by giving her that extra time to develop, she was able to showcase her ability today.

“Although she’s a 3-year-old, she’s still very immature so most of what we saw today was just raw ability.

“It’s taken her awhile to really learn how to settle but she’s getting better and I think she’ll be a much better filly in 12 months time because this is just her first prep with us and mentally, she’s still got a lot to learn for her brain to catch up to her body.”

Slow out of the gates from barrier 5 in the 1200m contest with Beau Mertens in aboard, Dazzling Lucy quickly mustered by was posted 3-wide with no cover as a consequence to her tardiness.

Given the choice to either settle out the back or press forward while facing the breeze, Mertens elected for the latter where he was able to settle the 3-year-old Star Witness filly into a good rhythm despite the lack of cover.

Cruising by the 600m mark where Mertens was tasked to keep the big filly balanced, he gradually made his move prior to the home turn where Dazzling Lucy was a tad wayward around the corner. Just when it looked like the leader had kicked off the bend into the home straight, Dazzling Lucy was able to re-find her balance to quickly eat up the 2 length margin to hit the front by the 50m mark and pull clear by a length for what was ultimately a very impressive win.

The win capped off a big hour for Noonan who took the honours of a race-to-race double with both winning horses raced under the Social Syndicates program where owners can get involved with well-bred racehorses from as little as $20 per month, and no upfront expenses. To learn more about the program or receive updates on the next horse available to Social Syndicates, please contact Social Syndicates Manager, John Mathieson by emailing john@tonynoonanracing.com.au.

The win also marked another special occasion for the Noonan stable with Dazzling Lucy being the second foal out of Sky Dazzle, a mare formerly trained by Noonan before an injury cut her racing career short. Bragging rights within the family however remain in Mum's hands with Noonan having broken Sky Dazzle’s maiden in her first career start while the much bigger daughter took twice as long.