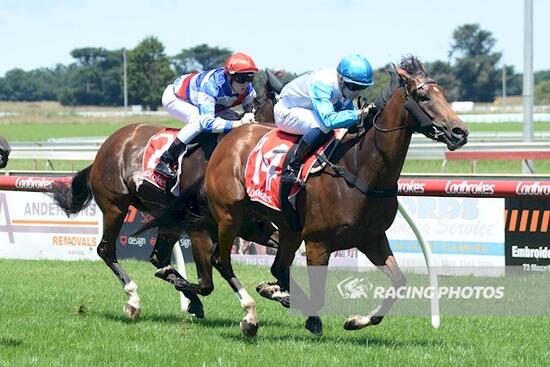 Despite the race meeting at Sale being postponed from Saturday to Monday due to substantial rainfall, the 48-hour delay was of no concern to Tiara Jewel who brought up a third winner in as many days for Mornington-based trainer Tony Noonan.

Making the win more special was the silks worn by Tiara Jewel, a purpose-made set that represents the Prostate Cancer Foundation of Australia which saluted the judge for the first time.

Tiara Jewel was purchased and syndicated by long-time Noonan syndication partner Laurel Oak Bloodstock who races the horse as part of their Men’s health awareness initiative. Beyond just racing the horse in the Foundation’s colours, Laurel Oak donates a portion of prize money earned by Tiara Jewel while Noonan also donates 10% of training fees.

Although it was great for both the trainer and owners to increase awareness around men’s health via the win, there were a few nervous moments for connections in the run.

“We were just sort of sweating on a run there halfway up the straight but once Josh (Richards) got her out, away she went,” said stable representative Rory Hunter after the win.

“She’s been a progressive filly. Tony’s just really taken the time with her and today we’ve seen her best foot forward.”

Jumping well from barrier 1, apprentice Josh Richards just eased the 3-year-old Hallowed Crowd filly out of the gates where he found a lovely position behind the leader in the 1200m affair.

Appearing comfortable in the Heavy 9 conditions, Tiara Jewel was just ambling up behind the leader before being boxed in at the top of the straight as others started looping the field.

Staying composed, Richards had a look towards the rail to see if he could sneak a run up the run up the inside but when that gap closed by the 300m mark, he was forced to come off heels where Tiara Jewel eventually found clear air but was then spotting the leader two lengths.

Balancing up again, Tiara Jewel ($3.90) burst through the gap to hit the front passing the 50m mark where Richard was able to kick clear by a neck and hold off the fast finishing Versilia ($3.40F) by a neck.

“We just had to be a little bit patient until she got that run but once she got the run, she picked up quite nicely,” said Richards upon his return to scale.

“She got a lovely run and she got through the ground quite well.

“She will get out further, it's just a matter of time but the team does a great job with them.”

Breaking her maiden after a gallant first-up placing, Tiara Jewel took her career earning beyond $20,000 in just her third career start.