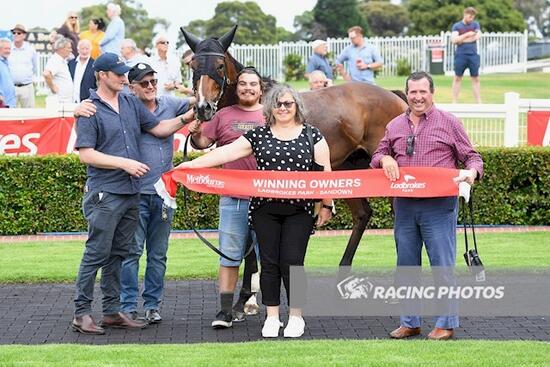 In a fill up for punters that found the last-start winner, It’s Tornado Storm made it back-to-back Sandown wins for trainer Tony Noonan who has improved the horse out of sight over the past 12 months since arriving at his Mornington stables.

While It’s Tornado Storm has never finished any further back than 4th place in the 8 starts when saddled up by Noonan, the veteran conditioner attributed much of the horse’s improvement to his staff.

“I can’t take much credit for this horse because my assistant Rory Hunter sourced the horse and it’s been a little bit of a project for him. He’s done a great job.”

But things had not been smooth sailing for Hunter who has had to make some tough calls along the way as to how hard he’d push It’s Tornado Storm.

“He’d (It’s Tornado Storm) come down and he didn’t really know a lot so we’ve just taken our time and gave him little preparations. Rory made the decision, the right one, to back off after he won which is always difficult when they’ve won a race and he’s had him well placed for today.”

Jumping well from barrier 4 in the field of 8 in the 1400m contest with rider Jake Noonan in the saddle, It’s Tornado Storm was able to find a lovely run in transit, one-out-one-back on the Hillside circuit.

Traveling comfortably behind what looked to be just a moderate tempo, Noonan casually eased off heels prior to the home straight, forcing those behind him to push deeper on the track.

As the field turned for home, the leaders elected to come off the fence which pushed those backmarkers even wider while Noonan was able to balance up by the 300m mark and only spotting the leaders three lengths.

Handling the dip at Sandown with no problem being a last-start winner at the track, Noonan was able to quickly click the It’s Tornado Storm ($15) through his gears before hitting the front at the 50m mark and holding on for a tough win by a half-head from Jenni Esprit ($11) and Irish import Grid ($7.50) a further head behind in third.

While the extra ground he forced others to make in order to come around him was ultimately what won him the race, the younger Noonan shared the views of his father in attributing the win to the team behind the horse.

“I’m not going to give too much credit but a lot of the credit goes to my partner Mariah,” said Jake.

“She spells him and he had a little gap in between runs. She was just able to keep good condition on him. He’s a horse that sort of lightens off fairly quickly when he’s racing so she’s sort of put a bit of bulk back into him, a bit of protein. From that little freshen up with good residual fitness, he was able to come here and win today.

“Rory does a fantastic job. His track rider Jess has done an enormous job with him because when we first got him, he was very aggressive.

“The first sit I had, [I said] this horse needs to run 1400 to a mile to be a winner and at this stage, we’re going to be flat out running 1000 because he just wanted to go too hard.

“They’ve done a really good job just getting his attitude right. We sort of had to sacrifice a prep just to teach him to settle but it’s started to pay dividends now and I think with more racing maturity, he should continue to progress.”

Now a 5-year-old gelding, by Toronado, It’s Tornado Storm was transferred to Noonan in December 2020 following 9 race starts in which he never finished any better than 6th.

In the 8 starts since arriving in Noonan’s care, It’s Tornado Storm has won 3 races with 4 further placings and taken his earnings past $85,000 after being purchased as a yearling for just $10,000 from the Inglis Gold Sale in 2018.